I really love Indian food, and the amazing spice mixtures they use, but am sometimes not in the mood to go through ALL of the steps the truly authentic recipes require. That is why I get so excited to find a recipe like this, for Eggplant Curry. I sometimes add a garnish of fresh mint, but that's up to you! Enjoy!


Mash garlic, ginger, and jalapeño to a paste with 1/2 teaspoon salt with a large heavy knife, then stir in mustard and cumin seeds and turmeric.

Heat oil in a large pot over medium high heat until hot, add the onion, stirring occasionally, until softened and golden. Add spice paste and cinnamon, then reduce heat to moderate and cook, stirring, 1 minute.

Add eggplant and cook, stirring, until it begins to soften, about 3 minutes. Stir in water, brown sugar, and remaining salt and simmer, covered, stirring occasionally, until eggplant is tender but not falling apart, 20 to 25 minutes. Season eggplant with additional salt.


My last class, had a distinct sizzle to it! We made stuffed chicken breasts, pureed vegetable soup and banana' s foster.

In the 1950's, New Orleans was the major port of entry for bananas shipped from Central and South America. Owen Edward Brennan challenged Paul Blangé, the chef of his eponymous restaurant Brennans, to create a banana dish that would promote the fruit. The dessert was named for Richard Foster, owner of the Foster Awning Company, a frequent customer and a very good friend of Owen.


Melt the butter in a large skillet over medium-low heat. Add the brown sugar and stir until the sugar completely dissolves, about 2 minutes. Lay the bananas in the pan and cook on both sides until they become slightly soft and begin to brown, about 3 minutes. Remove the pan from the heat and add the rum and cinnamon.

Tip the pan slightly and carefully ignite the alcohol with a long kitchen match or kitchen lighter to flambe. Put the pan back on the heat and shake it back and forth, until the flame dies out.

Alexander the Great discovered bananas in his conquest of India in 327.

I have been fascinated with the ongoing changes to British food for awhile. In the last 15 years England has become a real culinary destination. The greater availability of fresher, higher-quality products at, in effect, lower prices has triggered more competition among individual chefs, each one trying to excel the other. I love reading about what they are doing over there and adapting it. I'll write more about British food later, but in the mean time, check out the BBC's food page. http://www.bbc.co.uk/food/ Or whip up this recipe for trout that I made last night. Very basic, but very tasty. Try it and see!

Wash the leek, trim the green ends off and cut in half. Cut each half, length ways. Steam until tender and then place under cold water to keep the nice bright green color. Put half the lemon zest and marjoram in eachside trout and season with salt and pepper.

Wrap the trout in the leek strips and place in a buttered ovenproof dish, cover with foil and bake for 10-12 minutes or until cooked through.

While the fish is in the oven, make the sauce. Melt the butter in a saute pan and add watercress. Cook until it wilted and some of the liquid released has evaporated. Add cream, capers, salt and freshly ground pepper and nutmeg. Serve hot over the trout.

Last night I went out to Calabasas (wow is that ever far!) and taught a class to a group of friends who hold a Tuesday Night Dinner Club. They were all really sweet and enthusiastic about learning (which, you know, I love!) and are all great cooks! We made some pretty simple dishes...Ahi Tuna with Grapefruit and Mint, Chicken Chermoula, Israeli Couscous Salad with Pistachios and (yes, again...) Broiled Pineapple with Honey Creme Fraiche. They all seemed to love the food. I hope they call me again, because having clients like that makes it totally all worth while!

Maybe you will be inspired by them, and start your own dinner club! 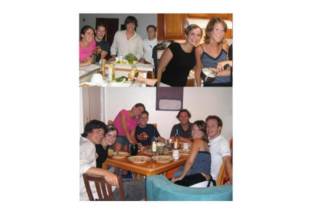 Below is a picture of some of the food we ate in Spain. It was the most amazing trip. Clockwise from the left: Bombon de Foie from the restaurant Az-Zait in Seville (amazing place, cannot recommend it highly enough.), typical Spanish salad: Iceberg lettuce, olives, eggs, white asparagus, tomatoes and tuna, with local olive oil on the side; also from Az-Zait: Salteado de Vieiras y Esparragos Verdes con Salsa Cafe de Paris (Crab and Scallops with Asparagus and a coffee sauce.) and from my brothers wedding: Ensalada de langostinos Sobre Timbal de Frutos Tropicales y Salmon (Shrimp and Salmon on top of Mango-Kiwi salad. 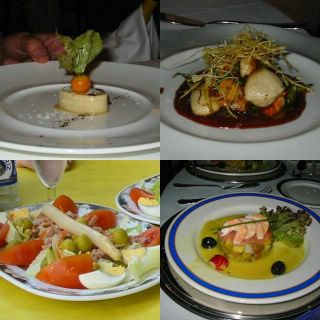