Well, in the world of Kosher food cooking, things are going smoothly. I have learned that one needs seperate OVENS for milk and meat products. Who knew! So our fritatta, which had cheese in it, couldn't go under the broiler, since the turkey meatloaf was in there earlier. The meatloaf, which was my sister Pamela's recipe, was really quite good. Meatloaf sure is easy to make, no wonder it's such a standard. I decided I need to start including more "ethnic" foods in my classes, since everyone notes my cuisine is very Cal-med and uses very light/fresh flavors. (I guess calling my company Fresh wasn't so silly!) I think in the spring and summer eating lighter food is better, so I tend to make foods with less oil or strong flavors this time of year. Here is a recipe for a salad I made the other day, for me.

Combine and pour over 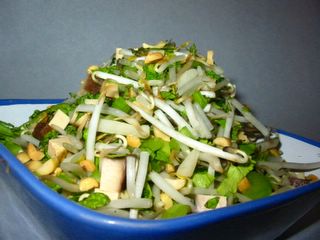 
Last night was my lesson with the Magnificent Seven as I call them. Seven really cool Hollywood player women who make me LAUGH. We made a LOT of food. Mojitos, Hearts of Palm and Avocado Salad, Spinach Feta Quiche, Caribbean Jerk Pork Chops, Filet Mignon with Cognac (when I flambed that though, I forgot to turn off the vent so the fire was HUGE, I totally thought the house was going to go up in flames. How I kept my cool, and didn't scorch my eyebrows off, I don't know. Note to self: No more flambe.) and Ginger Pear Sorbet. I was stoked to learn one of the women actually went home after our last lesson and made the Shaved Artichoke and Parmesan salad recipe from our last class!


Well, things are going well at Fresh. I've learned a lot about Kosher cooking these last few weeks! But the best recipe I've done lately is for Sangria. Here it is!

Thoroughly chill all ingredients. Pour wine, Triple Sec and brandy into a large punch bowl. Stir in the sugar until it has dissolved. Add ice cubes, orange juice and soda and garnish with fruit. Serve in 4-ounce punch glasses or wineglasses.

Make about 100 drinks. Can be halved. Or doubled.