MADE IN L.A. - Kruegermann Pickles 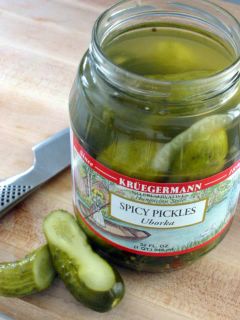 This blog emanates from Los Angeles, the City of Angels, and my home town.

One of the myriad of things that constantly astonishes me about this wonderful city is the endless-endless-endless variety we are presented with every day. Variety of climates, foods, people, things to do, ways to get stuck in traffic, you name it. There is one thing though that I have noticed lately is severely lacking -- locally produced foods. And with the Eat Local challenge, it's become even more of a focus for me. Now, I don’t mean produce, since LA is no longer the agricultural mecca is was as recently as 25 years ago, (Oranges, Lima Beans, Avocados, Strawberries, we had it all) but I'm talking things like (insert the foodstuff your town if famous for) It’s It’s from San Francisco (mmm.) or even a locally made jam. We just don’t seem to have that sort of thing. Oh sure, super-mega-huge food conglomerate Nestle has their West Coast headquarters here, but that doesn’t exactly count, now does it.

I've asked around too. Jonathan Gold at the LA Weekly didn’t respond to my email. Neither did Evan Klienman of Good Food (she probably thinks I should just be taking notes on her show since they cover this stuff a lot…or, you know, maybe she just doesn’t read her fan mail…) or my favorite food writer Russ Parsons at the LA Times. Nope, not a word from any of them. So I did my own digging. Every market I have stepped foot in for the last month I have asked the same question…is there anything here – premade – from LA? I didn’t mean was the lasagna made in the back kitchen, or need to know that everything from Trader Joes is packed up in Monrovia, I meant, is there a family somewhere in this hood churning out their own frozen entrees, packaging it up and sending out to the stores? Is there someone still making pie, or selling jars of their mothers famous red sauce? What out there on the shelves is truly MADE IN LOS ANGELES? (And no, Jessica Simpson’s edible body lotion does not count either…for a variety of reasons!)

The answers surprised and somewhat saddened me. There isn’t much that I’ve seen so far, and the majority of what I have come across falls under the raw and/or vegan category (though, in fairness, that could be because I shop at Whole Foods a lot.) or some incredible tortillas, but not much else. It makes me wonder, where are the culinary entrepreneurs? Where I ask you, where!?

Well, wherever they are, I want to find them and feature them here for a (possibly) fascinating, occasional posts called MADE IN L.A.

For the first foray into this world, I stopped into the Cheese Shop of Silverlake (a perennial favorite) and asked what they could offer a girl trying to eat locally. The choices included a wide array of chocolates and (what I ended up buying, since the chocolates weren’t fair trade) these fantastic Hungarian style pickles by Kruegermann’s, made in L.A. since 1896. (I'm sorry, I had to italize that, I mean, 1896? That's amazing for this town...) Now that’s what I call locally made!

I tried the spicy (that was all they were actually selling) and I was blown away. Medium sized cucumbers that were snap-in-half crisp, not too salty, had a nice sour pucker and a lingering spicy kick, these are a new favorite indeed. Sadly, their website is a bit of a mess, but if you can find these in your hood, I hope you will pick some up. They are worth seeking out.

So that was the first entry into MADE IN L.A. Hopefully, there will be many more…and if you know of something tasty I should check out, please email and let me know!

The total annual world-wide salt production is equivalent to the amount contained in two cubic miles of sea water.

According to Pickle Packers International, Inc., the trade and research association founded in 1893, the perfect pickle should exhibit seven warts per square inch for American tastes. However, Europeans prefer wartless pickles. - Hungry Monster.com

Labels: Made In L.A.

Comments:
Great post, Rachael ... keep up the good hunt. I had no idea that LA is no longer an agricultural mecca.

oooh. I will have to find those. I am down in Seal Beach. We love pickles!

My Life As A Reluctant Housewife

Amazing, spicy pickles! I was planning on have a burger tonight but now it will seem bland without these little babies. I am so jealous!

Kruegermanns Rule. Just a correction, they have been making pickles for over 100 years, but only came to LA in 1961.

MADE IN L.A. - Kruegermann Pickles