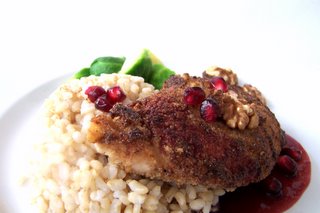 The taste of a pomegrante is a perfectly rhapsodic burst of sourness. When split open the seeds appear like little garnet colored jewels (cliche alert!), beckoning to stain your fingers and lips. They are so wintery, (and according the the Greeks of old, a part of why we have winter at all, right?) they become the focus of a zillion recipes this time of year. Everyone wants to play with these beauties.

The sauce is rich, vibrant and tart, the chicken, nutty and juicy and together they are just plain tasty. I based this on the concept from a book I have mentioned several times before, Flatbreads and Flavors, a thoroughly investigated and lovingly produced compilation that I draw great inspiration (and envy!) from. This dish, for instance, is, according to them, a standard in Georgia (as in, the Eastern European country. Not the Southern US.), that I made using most of the same ingredients, but in a simpler, sleeker and more contemporary fashion. Try it, and enjoy.


In a medium sauce pan, combine the pomegranate juice, seeds from half the fruit, red wine and broth. Simmer on medium for about 15 minutes, or until reduced by a third. Swirl in the butter, taste and add a pinch of sugar if you think it is too sour, also season with salt and pepper and add the minced thyme. Continue to simmer on low, while you make the chicken.

In a small chopper, combine the walnuts and rice flour until finely chopped (but not turned to walnut butter!) pour onto a wide plate and dredge the chicken (both sides) in the mixture then saute in a large skillet over medium high heat for about 4 minutes (each side) until throughly cooked. Remove from heat, garnish with the remaining seeds and serve with the sauce.

The San Joaquin (Whah-keen) Valley is home to the only concentration of commercially grown pomegranates in America. Spanish Padres brought pomegranates to California 200 years ago.

Sales of foods used as natural remedies have soared because of the support of Prince Charles, according to the supermarket chain Sainsbury's. Fresh cranberries and pomegranates have sold in "record volumes" following a study of complementary therapies commissioned by the Prince, according to the retailer. "The biggest impact has been upon fresh cranberries and pomegranates, which have sold in record volumes since the Prince's report was launched." of pomegranates are up 79 per cent on last year. And cranberries have recorded a 67 per cent sales boost, Sainsbury's said. - Telegraph.co.uk

Comments:
That looks and sounds terrific. FOund your site from your foodscool post. Sorry can't help ya with the number of posts on the front page. I don't think it's that crucial, ya know? I think your site looks great as is- I wouldn't do anything different!

When I extract the seeds from a pomegranate, some of them are grey or a dull-pearly white instead of the normal brilliant crimson. Do you know if these seeds immature? Or are they over the hill?

BTW, I love the little tidbits below the main posts.

Marc - I have no idea about those seeds. I looked online for a few minutes and didnt come up with any answer either...sorry!

I fall for the pomegranates this time of year as well. Thanks for another excuse to stock up!

This is a fantastic recipe. Very simple to make, but has a extraordinary taste. Is there anything a pomegranate can't do?