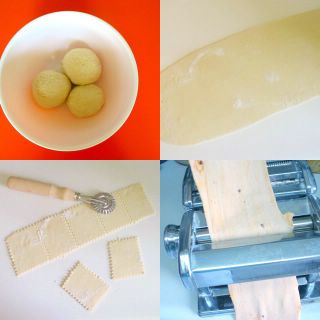 I was young, I was green and I wanted a job. Somehow - considering at the time I didn’t know how to boil water - I managed to secure a little gig at the local cooking shop, where on my first day they assigned me the task of demonstrating an Atlas pasta maker. Needless to say it changed my life. I grew to love that funky little hand crank machine (despite the fact you have to clamp it to a counter top and in then six places I have lived since I got one, I have yet to come across a single countertop the durned clamp fits over!) especially when I realized you can make things other than pasta with it. For instance, crackers. Mmmm. Now I know, you are thinking crackers are just easier to buy, but trust me, these are simple, delicious and really fun to make. The variations are endless (I can not resist adding adobo sauce from a can of chipotles) and they keep for about a week. The main trick is to prick them with a fork a few times to prevent them getting all poofy, and use bulkier seasonings (any seeds or dried herbs like rosemary) as a topping (versus in the dough) so they don't cause tearing.

I adapted this basic recipe from Flatbreads and Flavors which is a seriously awesome book and overall fantastic resource. Oh, and as you can see, my camera came back to life, so there are some pictures of the process too! The strip of dough in the machine has the chipotle sauce mixed in, which is why it seems reddish. And, of course, ditzy me, I forgot to take a picture of the end product. Whoops. (And there certainly aren't any left to take a picture now. Whoops again.) Anyway, try this and enjoy!

In a food processor, combine the salt and flour with a few pulses. Turn the machine on and slowly add the water until the dough forms a ball. The dough should still be a little webbed, (versus smooth) but not sticky. If it is sticky, add some more flour. Remove the dough and divide it into a few smaller balls and coat lightly with olive oil. Let the dough rest, covered for about 20 minutes. If you are making the crackers later, you can put the dough in the fridge for up to 8 hours. If you do that, let them come to room temperature before proceeding.

Using a pasta maker (or a rolling pin) roll out the dough to about an 1/16 of an inch thickness (I got to the number 5 setting on the pasta maker.)., using a little bit of flour to keep it from sticking to the machine.

Cut the strips of dough into any shape you like, as long as they are roughly uniform in size. Pierce each one a few times with a fork. If you like at this point you can brush them with some olive oil and sprinkle with salt (or sesame seeds or whatever).

Transfer to a baking sheet and bake for about 12 minutes at 350F or until just browned. You will want to sample one to make sure they are crisp.

What a great idea! I love the idea of making homemade crackers and I never would have thought of using the pasta maker. I've got to try this!

How fun! I am going to have to try that with my boys - they'll LOVE it!

Hi, I know this is an old entry, but hopefully you will see this - I came across this recipe when searching for homemade crackers and am about to try it, but I don't know what temperature to turn the oven to. Hope you can let me know.
Thanks

Thank you :) I am just cutting them out now.