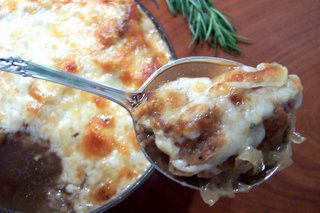 So my little peaches, I hear you like onions! Excellent. They are abundant in the market, inexpensive and versatile. So with that covered, the next step is to see if you like cheese and aren't afraid of your broiler. If you are good with those things too, why not go ahead and make some French onion soup? It's ooey gooey, rich and hearty, sophisiticated (as long as you can get that first bite without spilling the whole bowl. A challenge indeed) This recipe calls for a basic browning of the onions, but if you want to go all out and caramelize them, the soup will be all that much better. Try it, and enjoy! 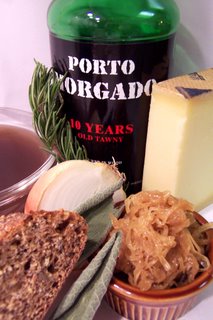 In a medium sized soup pot over a low flame, melt the butter. Add the onions and herbs. Stir to coat. Cook for about 30 minutes or until softened and browned, stirring frequently.

Sprinkle the flour over the onions and stir to coat. Add the broth and bring to a gentle simmer Season to taste.

Ladle the soup into four oven proof bowls. (I suggest having the bowls on a sheet pan so it's easier to transfer them to the oven once they are filled) Top with a slice of bread and some grated cheese.

Adjust the top rack in your oven to accomadate your bowls and still be about 4 -6 inches below the broiler flame.

Broil the soup until the cheese is melted and just browned, about 2 - 3 minutes. With extreme caution, remove the soup from the oven and serve.

The ancient Egyptians worshipped the onion, believing that its spherical shape and concentric rings represented eternity.

King Louis XV of France is one person credited with the invention of this dish. It is said he returned late one night to his hunting lodge, and all that was on hand were onions, butter and champagne. He mixed them together and created the first French Onion Soup. Because, you know, Kings are always fiddling over a hot stove...

I was so excited to find your comment in my inbox! In my books you're pretty much a celebrity ;)

I can assure you I have only used superlatives when referring to your recipes. The caramelized onions were out of this world (I cooked them for 4 hours), and the french onion soup simply divine!

I'll definitely be checking your blog out for other great recipes.

Thanks for the recipe, French cuisine has a lot of interesting recipes.
I've got a blog about French cooking where you can find a lot of them.