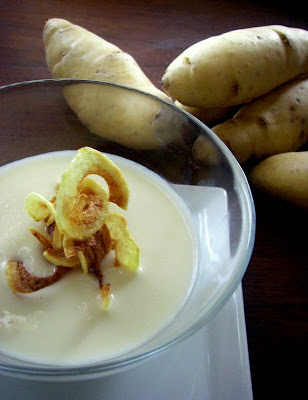 Growing up, my parents (much to their credit) didn’t have a lot of pre-made foods in the house. No frozen dinners, or packets of instant anything. And there just weren’t any unhealthy snacks. (Again, to their credit.) Maybe there would be pretzels, and once in awhile a few dozen packets of airline peanuts would show up, but that was about it. Certainly no chips...

Now, one day, when my brother and I were 9 (me) and 11 (him) we decided we really needed those potato chips…and since there were none to be found, we naturally just got it in our heads to make them ourselves.

(This is where us seeking adult supervision would have been helpful. But we were really independent children, and not exactly prone to telling anyone what we were up to most of the time. Or, ever really.)

If I recall correctly, without consulting any one or any books, we surmised that chips are made by dropping thin slices of potato in to hot oil. Super easy! So, we got out a large pot, a giant jug of olive oil, some knives, some tongs and paper towels. We set the pot on the stove, filled it with oil (I’d say just around a gallon) and sat to wait for it to boil.

Yes. We sat waiting for the oil, to boil.

Now some of you may not realize what is wrong with that statement, so please let me clarify. Oil, does not actually boil. I mean it gets good and hot, yes, but it does not visually indicate it is hot with bubbles breaking the surface. No, really hot oil just starts smoking. At first. Then it bursts in to a huge flash fire.

Good times, good times. And by that I mean, near fiasco. (And alas, this is not even the first or last story of us nearly burning the house down. Oops!)

I do know we somehow got the fire out, (we are nothing if not level-headed people) poured the screaming hot oil off of the balcony (Believe it or not, this was the action that got us in the most trouble. The stain from the oil never came out of the pavement below. ) and fanned the extremely thick black smoke out of the kitchen as best we could. When my parents found us we were sitting nonchalantly on the couch watching cartoons and eating apples.

The lesson there kids, is that oil doesn’t boil…and when we are adults and armed with a little know how, chips actually are easy to make at home.

I still don’t have pre-made food in my house though…so recently, much like that day…when I wanted something fried and salty, I did what I have always done. Made them myself. And they were good. And the house is still standing. A triumph indeed.

Peel all of the potatoes. Slice one in to thin rounds, and the other 2 just into a rough chop. Soak the slices in cold water while you prepare the soup.

In a medium soup pot, sauté the potato pieces, onion and garlic until soft. Add buttermilk and salt and reduce heat and let simmer for 15 minutes or until the potatoes are soft. Remove from the heat and puree in batches. Strain through a fine mesh strainer. Taste and add salt and white pepper as needed.

In a medium pot, pour oil to a depth of ½ inch. Heat until a thermometer reads 310F. Remove sliced potatoes from cold water and pat dry. Fry until golden, remove, sprinkle with salt and let cool.

Use the chips as a garnish on the soup.

I used Weiser Family Farms potatoes and sweet onions, that I got at the Santa Monica Farmers Market. The buttermilk was left over from making butter. Yes, I'm that big a geek.

© 2009 Rachael at "Fresh Approach Cooking" http://www.freshcatering.blogspot.com If you are not reading this at the aforementioned URL or in your RSS feed, the site you are looking at are violating my copyright. And that's rude.
Ever wonder about the process for producing kettle-style potato chips? Check it out, here.
Follow me on Twitter http://twitter.com/ChickswKnives
Vichyssoise (pronounced /viːʃiːˈswɑːz/) is really a French-style soup made of puréed leeks, onions, potatoes, cream and chicken stock.
If you are in San Juan Capistrano (or thereabouts) on Sept. 12th, check out the Ecology Center's celebration of local foods, Green Feast fundraising dinner!