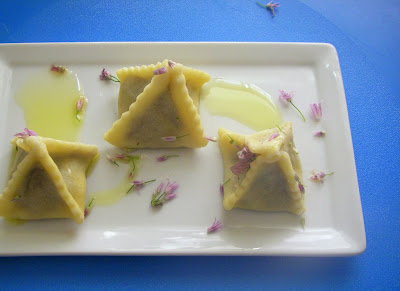 Technology still sometimes leaves me bug-eyed. How about you?

I mean...there you are, using your phone, browsing the web, taking pictures and emailing someone 2000 miles away or texting someone sitting next to you, all at the same time. It's really a bit astonishing.

Much like our food, of course. Even this most mundane things have a lot going on!

We can't just drink that glass of water and not remember that a whole lot of nature and technology and man-power went in to it appearing in a vessel with some frozen cubes and a slice of citrus for our consumption. It too is astonishing.

That's pretty much the gist of my world these days. Taking a moment to appreciate that which got us what we eat. It's a vast and amazing system! Wooo---eeeee. Again...it leaves me bug-eyed and slack-jawed.

Like when I was in my favorite old-fashioned book store and I came across a photo of pyramid shaped ravioli. So cool! I snapped a picture of the picture with my phone, emailed it to a friend and queried if she thought we could muster something like that for the vegan edition of our underground supper club, Chicks with Knives. Wham-bam, she replied and we were a go. Technology in action.

Then we just got our sweet selves to the bountiful local farmers market, pondered the fillings possibilities and voila...ravioli. (Well...there was a lot more to it than that. Testing and fussing and tasting and contemplating and pasta rolling and breaks and laughs and all that good stuff. Plus we changed our minds about what sauce went best with it about sixty-five times. And I swear at one point we thought about deep-frying them. Or maybe that was just me. I do love deep-fried!)

So we made 90 of them (Took us, what, three hours? Give or take.) and served it at our swank little dinner party to our glamorous guests and it was a smash hit. (Which I can say with confidence because - technology again - they were reviewed on line by other bloggers.) And that, was that. Technology meets old fashioned cooking. A match made in...the year 2009. And perfection all around.

They are toothsome and filling and salty and rich (without dairy!) and have a faint perfume of garlic and orange. The chive blossoms as garnish offered just the right visual punch and a tiny bit of additional flavor. (Coarse salt would be nice too...naturally.) We only offered two per person (because in all honesty...making another 35 of them would have killed us at that point. It's a lot of work doing this sort of thing on a grand scale!) but at home, I would encourage you to serve five per person.

Now, all of the ingredients in this recipe were organic and sourced locally (mostly at the Santa Monica Farmers Market. We used Santa Barbara Olives and olive oil for instance) but you can really do with anything if that's how you swing. ;-)

So try this my peaches, and enjoy.

In a mixer, combine the flours. Add the olive oil and enough water to bind. Continue to mix until it all comes together adding water, as needed, to keep it smooth and not tacky or crumbly.

Roll out the dough using a pasta maker (per the manufactureres directions) or with a rolling pin. Cut in to four inch squares and chill until ready to use.

Trim down the artichokes (we used ones that were huge. Like 4 pounds each.) to their hearts and steam until soft. Mash with the potato (to bind), olives, garlic, zest and parsley. Season to taste.

Mound 1 tablepsoon of filling in to the center of each square of pasta. Lightly brush the edges of the pasta with a touch of water then gather up the corners and pinch shut. Using pinking shears, cut to crimp and seal. Freeze until ready to serve.

Boil the ravioli in a large pot of salted water until cooked through...about 3 minutes tops. Drain and serve with warm olive oil and chive flowers.

All artichokes commercially grown in the United States are grown in California.

Have you read Secret Suppers by Jenn Garbee yet? So great...

If you are in the Bay Area, the Millbrae Spring Faire is this weekend and features a Ravioli dinner.