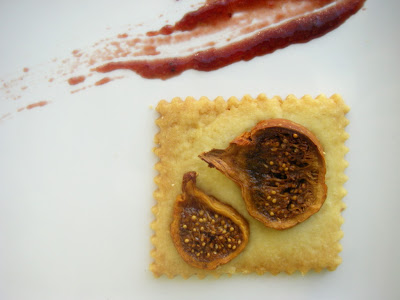 Do you window shop at the cupcake store? Do your eyes take in the chocolate counter while your mind says "just one! Just buy one!" While your wallet resists? I know I do.

I love to stare at the treats in the little french bakery and wonder. I love all the precision and gloss. The sticky-sweet offerings. But I rarely buy any of it. Do you?

I much prefer to get my hands in and make something of my own.

Maybe you do too?

Because that way, when I have my dear friends over for a cup of tea or a nice little drink, we can have a nibble too. Nothing overtly sugary, just a touch of sweet. Enough to compliment without causing a case of frosting-freeze. (When one consumes so much frosting nothing else can penetrate the taste buds. Typically experienced after two bites of a Sprinkles or Magnolia-style cupcake.)

This cookie (which really falls more in to the biscuit catagory if you ask me.) is all crumbly and rich, like the fig-newton it was modeled after. I loved the way they looked when they were finished. Like each slice of fig was set in a frame all of its own.

Try this my peaches, and taste the joy.

(Very) Adapted from Nancy Silverton's Pastries from the La Brea Bakery (an excellent book, very much worth purchasing.)

In a mixer fitted with the paddle attachment, combine the ground anise seed, flours and sugars. Cut the butter in to small cubes and add. Mix until combined. Add the yolk and vinegar and knead until it just comes together.

On a lightly floured board, knead the dough until smooth. Divide in to two disks. Wrap and freeze for 30 minutes.

Remove one disk from the freezer and roll out on a floured surface. Cut in to squares (I used a fluted pastry wheel to do that.)

Place the sliced figs on to the cookie squares and press down gently to adhere. Place on to a parchment lined baking sheet and bake for 15 minutes or until just golden.

The common fig bears a first crop, called the breba crop, in the spring on last season's growth. The second crop is borne in the fall on the new growth and is known as the main crop. 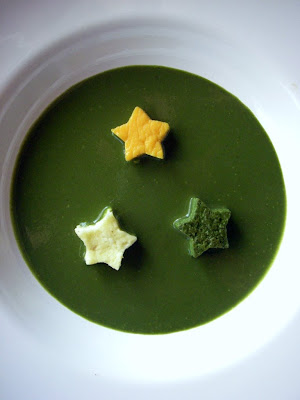 Happy new year everyone! I hope you had a safe and lovely NYE and that you are primed and ready for the next 365 days of madness, glory, good eating and delights.

(What can I say...all things considered, I still hold out for hope and change and all those pretty buzz words...)

My holiday season was quite terrific – with warm days and lots of festive goings on. It really was just flawless.

The one mistake I have made though, was neglecting my beautiful garden. I hadn’t even peeked at it until today and while it really does look a mess (grass has sprung up everywhere. Aye-yi-yi) the soil is dark and rich and lovely and lots of things have burst out in their winter glory.

The celery and fennel have gone wild in a good way, the arugula and sorrel in not-such-a-good-way. And the spinach! My word, it was everywhere. Again. It’s amazing and beautiful. So, naturally, I tore it all out. Not in a malicious way…but because I wanted to eat it. Mmm. But the big suprise was that there were exactly three parsnips. I was so shocked. Sure, they were a bit anemic but I had grown them myself and was pretty excited about that.

I decided to make a soup I have posted here before...but this time, had the time to really sass it up. Because while a bowl of soup is a beautifully rich meal, a bowl of soup with some sass to it is all the better. And that is where the parsnips came in as little starry soufflés.

The concept is based on the Fluffy Spinach Bites in Michel Richard’s glorious cookbook, Happy in the Kitchen, but I changed it up quite a bit to meet my needs.

They came out beautifully. They have the most incredible texture. Light and fluffy for sure, but dense with flavor.

And if you like them (and I know you will.) they also make a fab little passed appetizer. And don't be daunted by the long recipe, it really is a snap to do. Just go with it and reach the zen.

To make three different croutons, I made a base of the parsnip flavor then divided it in to thirds and flavored the other batches with carrot and roasted pepper (respectively.) You can really do any assortment of flavors you like, but my point is that this makes three batches of 64 bites each which is a lot. They hold in the fridge for three days or you can just make a third of this in only one flavor. Just don’t try to make three flavors with a third of this…you won’t get enough “batter.”

Now try this my peaches and taste the joy.

Preheat oven to 300F. Line three 8” square baking pans with foil. Make sure the foil overhangs on two sides so later you can lift the soufflés out. Butter the foil and set aside.

Steam the parsnips and carrots, separately until very soft. (In a steamer basket works best, though I admit, I microwaved them with a bit of water.)

In a blender, combine the steamed parsnip with all of the cream, eggs, sugar, salt, gelatin and parmesan. Puree until smooth. Remove and divide evenly between three large bowls. Season one batch with black pepper and pour in to the first baking pan.

Puree the third (last) batch with the roasted pepper, additional cheese and chile flakes. Pour in to the third baking pan.

If you are using them in soup, ladle some of the soup in to a shallow bowl. Swirl some cream on top (using a squeeze bottle works best.) then top with croutons.


© 2009 Rachael at "Fresh Approach Cooking" http://www.freshcatering.blogspot.com If you are not reading this at the aforementioned URL or in your RSS feed, the site you are looking at are violating my copyright. And that's rude.

We served this soup at the November edition of the CWK Sustainable Supper Club. Are you on the list?

Crystal City, Texas is the self proclaimed Spinach Capital of the World, though California produces far more spinach than Texas growers annually.

Michel Richard was the James Beard Outstanding Chef award in 2007.

Looking for other spinach soup ideas? Check out what Ilva did at Lucullian Delights.