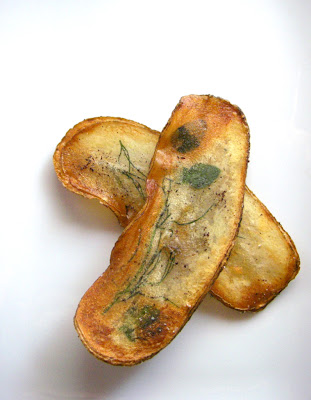 How are you today?

I hope so! (Me? I'm stupendous! Cannot complain~)

Are you prepared for the onslaught of holiday delights? Are you ready to start indulging like none-other?

Perhaps you are in need of the taste appeal of a potato chip?

These are - without a doubt - the fussiest and silliest things to make...and there is even an easier way to do them that involves a few sheet pans and a brick, but I like this method and am here to share - yes indeedy.

It does require a Mandoline slicer though, for sure. So bust that pretty thing out and rejoice that you have an excuse to use it. And if you haven't got one...um...you should skip this. Because as much as I would like to say you can accomplish this with a good sharp knife...you can't. (Shrug.) But onward anyway!

So this recipe is for stained glass potato chips. Sometimes called potatoes Maxine (but only by someone I'm not entirely sure I trust with culinary nomenclature.)But you know...it's the method when you sandwich herbs in between two paper thin slices of Idaho potato. So it looks purdy and has a hint of fabulous. Because in these economic times, potatoes are still cheap and cheerful even if not much else is.

So try this my little peaches and taste the salty-fried joy.

2 large Russett/Idaho/Burbank potatoes
2 cups clarified butter or canola oil (go for the butter if you can)
1/2 cup assorted fresh herbs (obviously I used fennel fronds and oregano leaves. Just make sure you use soft herbs and nothing woody that will tear the potatoes...like rosemary)
Salt

Slice the potatoes in to almost translucent thin slices. Keeping pairs together.
Lay one slice down and add some herbs. Flatten with your fingers and top with the matching slice. Continue with the rest of the potatoes.

Heat the butter/oil and add the chips two or three at a time. Fry until golden. Remove to a cooling rack (good idea to put that rack over a paper towel or cloth so your counter stays clean.) Salt and continue frying the rest of the chips.

© 2008 Rachael at "Fresh Approach Cooking" http://www.freshcatering.blogspot.com If you are not reading this at the aforementioned URL or in your RSS feed, the site you are looking at are violating my copyright. And that's rude.

As dictated by French law, the third Thursday of November -- is the first day of the year when Beaujolais Nouveau can be sold. The red wine, made from Gamay grapes, is the first wine of the new season. Though critics long have dismissed Beaujolais Nouveau as unsophisticated, the wine surged in popularity in the 1980s and '90s. More recently, subtle price increases in the relatively inexpensive wine, along with competition from other cheap wines, have chipped away at sales. Distributors and wine shops expect sales to drop slightly, maintaining the downward trend that began earlier this decade. Last year, 2.55 million bottles of the wine were shipped to the U.S. That's down from 3.9 million bottles sold in 2001.The average price this season will be $12.99 to $14.99. That's up about a dollar from last year, he says. Sales for the 2007 season were down 12% from 2001. - WSJ

History of the potato? Sure! Right here. 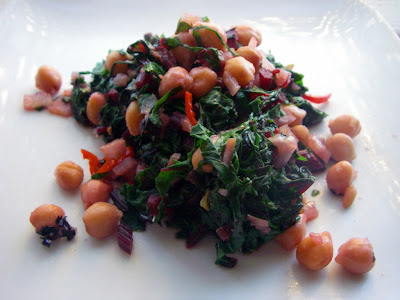 Last Sunday night I was expounding (as I am prone to do) to an enthralled audience (I'm sure...) on the difference between beets and chard, when someone stated that they are nothing alike, from a nutrition standpoint.

Well. She was just plain wrong.

And, of course, exactly right.

Beets and chard are not much alike - nutritionally.

One is a sugary root and the other is a leaf for heavens sake.

But I was talking about beet greens.

Which are nutritionally quite similar to chard, only a bit of a different color and texture...because chard is just a variety of beet in which the root is not overly developed.

And to think, I used to work in "communications." The irony is not lost on me. (And I do hope that is the proper use of that word.)

The good news is, I have this space to clarify (or not, depending on if this is clear to you.) and to post a nutritional power-house recipe for chard and chick peas.

A quick side-dish. It is perfect with brown rice or as a filling for tacos. I also like to use the left-overs in a fritatta.

Rinse the greens and set aside. Do not dry.

Heat the oil in a large pan and saute the shallot and garlic until fragrant, about 1 minute. Add the greens and fruit juice and zest. Saute until wilted. Add the beets and chick peas and stir to heat through.

The beet (Beta vulgaris) is a plant in the amaranth family. It is best known its numerous cultivated varieties, the most well known of which is probably the red root vegetable known as the garden beet. However, other cultivated varieties include the leaf vegetables chard and spinach beet, as well as the root vegetables sugar beet, which is important in the production of table sugar. - Wiki

Misshapen fruit and vegetables won a reprieve on Wed from th EU as it scrapped rules banning overly curved, extra knobbly or oddly shaped produce from markets. Ending regulations on the size and shape of 26 types of fruit and vegetables, authorities killed off restrictions that had become synonymous with bureaucratic meddling. In July, these standards for the 26 products, as varied as peas and plums, will disappear. For 10 other types of fruit and vegetables, including apples, citrus, peaches, pears, strawberries and tomatoes, shape standards will remain. – NY TIMES