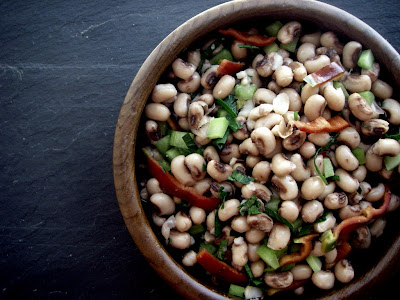 Tell me peaches, are you taking part in the Eat Local Challenge?

I'm on day six and rockin it like no other. (With exceptions of course. Since there isn't much alcohol for those cocktails produced in these parts. Yet.)

And talk about fab-tastic diet! I feel so invigorated and empowered and sassy. Supporting local farmers and the local economy.

Plain and simple, it's the best! (Plus, I swear, I lost that stubborn 3 pounds I am always whinging about. Most happy!)

I could go on and on, but since most of you aren't in a temperate climate, it may not be the easiest thing for you to take part in. But no worries, since this recipe can be made any old place. Texas, for instance. (Since I assume, based on the name - that is where it originated.)

It's just a bean-dream. All kinds of yum. Makes a girl smile.

The flavors are smokey and salty and creamy (that be the beans) and nutty (beans again) and get better n' better after a day or so of marinating. And it is totally open to being fussed with so you can really do whatever you like to make it your own. I personally served it as a side dish, but I hear tell that in Texas it is actually a kind of salsa. (As in, for chips. Seems...tricky to me. What with the beans being round-ish and all. But hey. Texans have skillz.)

So try it my lovelies and taste the joy.

Toss the beans with the oil and vinegar. Add salt and pepper and let sit at room temperature for 1 hour.

Toss in peppers, onions, parsley and celery. Let rest until ready to serve.

Just before serving, in a dry skillet, saute the speck until crispy. Garnish beans with speck and serve.

In this recipe, all of the ingredients either came from the Hollywood Farmers Market or my own garden.

2008 Rachael at "Fresh Approach Cooking" http://www.freshcatering.blogspot.com/This RSS Feed is for personal non-commercial use only. If you are not reading this material in your news aggregator, or at the aforementioned url, the site you are looking at is guilty of infringing upon terms of my copyright. And generally cheesing me off.

Speck is leg of pork which has been cured in salt and spices. It rests for several weeks before being cold-smoked slowley at 20°C or lower. The speck is then allowed to mature for about five months.

We served a version of this at our August Chicks with Knives Sustainable Supper Club. If you are in LA, I hope you will join us for the next one!

The suburban New York store where Tom Carvel launched his Carvel's ice cream empire is set to close after more than 70 years. Tom Carvel's ice cream truck got a flat tire on Hartsdale's Central Avenue in 1934. He was forced to pull over and did such brisk business that two years later, he opened an ice cream stand on the spot, about 25 miles north of Manhattan. - AP

Comments:
Fab photo! Lovely idea for a salad. Got any ideas for substitutions for the Speck? (I've never heard that term. Call me provincial!) I mean, if I wanted to make it vegetarian but wanted that salty crunchy thing happening.....

Thanks! Speck is just smoked proscuitto. They sell it by the slice at Whole Foods. If you wanted to skip it...hmmm...I wonder if parsnip chips would be good?

And I just realized I tagged this as vegan...LOL. Obviously to make it that way one just needs to leave OUT the pork...ha ha ha.

I only had this salad once and was looking for a recipe. Thanks a lot. Pretty picture.

This is a really tasty and fresh way to make beans. I've lived in Texas before, but never had the chance to try these. I love the textures and fun ingredients. I'd really like to feature this recipe in our Demy, the first and only digital recipe reader. Please email sophiekiblogger@gmail.com if you're interested. Thanks!