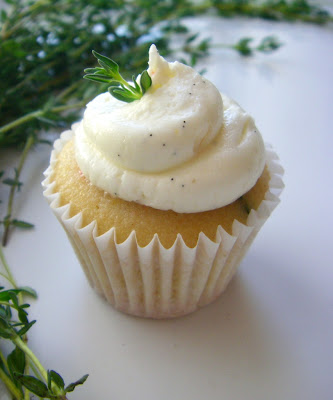 I'm bringing out the big guns.

I mean it kids. I don't mess around.

When I want a full-fontal attack of the heart and the smile, I think it's best to bring out the tiny taste sensations.

Something we can all come together over.

Now if you – my angels, my loves – have an urge to try the single best cupcakes ever devised, I urge you to try this recipe which was developed and writen entirely by the world's greatest pastry chef, and my dear friend, Suzy Griswold...based on my daft "I want lemon-thyme!" cry...and taste the joy.

Sift the flour, baking powder, baking soda and salt together.

Combine and whisk together the crème fraiche, eggs, vanilla, lemon and thyme.

Put the butter in the bowl of a stand mixer fitted with the paddle attachment. Beat on medium speed until the butter is creamy. Stream in the sugar and beat until fluffy and pale.

Divide the batter evenly between the liners, filling them about two-thirds full.

Bake until the cupcakes are lightly browned and slightly cracked on top, 15 to 20 minutes. Let cool completely in the pan on a rack.

Place the butter and vanilla bean seeds in the bowl of a stand mixer fitted with the paddle attachment. Beat on medium speed until the butter is creamy.

Add 2 cups of the sugar and then the milk and vanilla beat until smooth and creamy, about 3-5 minutes.

Gradually add the remaining sugar, 1/2 cup at a time, beating well after each addition (about 2 minutes), until the icing is thick enough to be of good spreading consistency. You may not need to add all of the sugar. If desired, add a few drops of food coloring and mix thoroughly. (Use and store the icing at room temperature because icing will set if chilled.) Icing can be stored in an airtight container for up to 3 days.

This RSS Feed is for personal non-commercial use only. If you are not reading this material in your news aggregator, or at the aforementioned url, the site you are looking at is guilty of infringing upon terms of my copyright. And generally cheesing me off.

Indiana State Police said Anthony Herbert Lee, 38, of Hammond, was arrested Saturday for trying to sell the nearly 13.5 tons of stolen pizza, worth more than $45,000. A company contracted Lee to pick up 3,000 cases of Stouffer's frozen pizzas from Nation Pizza in Schaumburg, Ill., on Aug. 31 and deliver them to Springville, Utah, on Tuesday. After having motor trouble and realizing he wouldn't make the delivery date, Lee called his insurance company, according to police reports. He led the company to believe he owned the pizzas and needed to sell them, police said. - NWI Times

Comments:
I love the combination of lemon and thyme in savory dishes. Hadn't thought to try out their sweet side, until now. Thanks!

What a wonderfully creative idea!

I wonder what other herbs could be served up sweet...

I will give this a try, the little thyme plant in my garden has done very well!

Looks so fresh and delicious! Hence the name of your blog haha, I love anything lemon flavored!

I made these last night for a barbecue and they were a big hit! I seem to have quite a bit of frosting leftover. Just out of curiosity, how many cupcakes did you get out of the batter? Thanks!

Ani - this made 24 small cupcakes and a gang-load of frosting...which I froze. Okay...I ate some and then froze the rest. Good question, and sorry I left that info out!

Any particular type of thyme you used. I am growing lemon and lavender thyme in my herb garden, so I may try both. Thanks for the recipe.