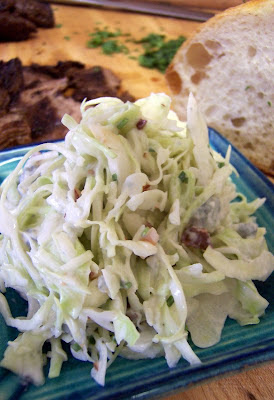 If for some random reason, I were writing an essay on how I spent my summer vacation, the thesis statement would simply have to include words like "dazzling," "marvelous," and "indulgent."

I would rhapsodize about the picnics, road trips, afternoons spent at the beach, decadent, balmy cocktail-fueled nights and a life-time supply of cheek-aching laughter. If it were being graded, my essay would rock an A. (With a note to tone down the hyperbole, I'm sure.)

But I'm not a school-girl any longer, being asked to summarize three months of my girly-exploits on two, single-spaced pages. And you, my darlings, are here for the food. Thus, I will spare you (most of) my revelry.

But there were culinary highlights, lots of them! And this recipe rings in at number one. Ding-a-ling!

It first appeared in my rotation at a backyard fiesta, and was declared an instant classic by all present. Reappearances (on demand) included a riotous night at the Hollywood Bowl; an engagement party so far away, that as I wound my way further and further up in to the hills, I feared I was about to emerge one state over; and then at a few other, assorted parties. All in all, it made the rounds, charmed the pants off of a wide array of partiers, and has solidified its spot in my pantheon of recipe perfection.

And I didn't even come up with it. How's that for humbling. I did make a few, minor adjustments, but overall, I must give credit where credit is due. This recipe originated with my personal guardian angels, Melanie and Taji of Simple Gourmet. Two women who make food, fantastic. Gosh I lurve them.

But enough about that...let's talk about how simple, and gourmet this cabbage-creation really is. 5 minutes of work, and wham-bam, culinary delights ready for consumption.

Try this, my peaches, and enjoy!

Combine the mayo, sugar and vinegar. Season generously with pepper and just a touch of salt (the blue cheese is salty, so you will want to adjust that after it is added.)

Pour half of this mixture over the shredded cabbage and shallots. Toss to coat. Taste the coated cabbage and adjust the seasonings in the remaining mayo. Does it need more sugar? Vinegar? Is it too thick? (If so add a few drops of water) So adjust, and add the rest to the cabbage. Add the walnuts and blue cheese. Gently incorporate. Let rest for at least 15 minutes. Taste, add salt or pepper as needed. Garnish with chives and serve.

I read the book, Into The Wild, and honestly, it made me mad. Now, a dear (and sensationally glam) friend is in the film, and well, I hope you will all go check it out. I'm going to.

Researchers at the Institute of Agricultural and Environmental Sciences at Tennessee State University tested dilute vinegar against plain water and a commercial product called Veggie Wash that they purchased at a grocery store, to clean produce. "We really did not really find the veggie washes effective or necessary," says Sandria Godwin, who oversaw the project. Godwin says they do get rid of most bacteria, but her team of researchers found that water works just as well. They found that water can remove 98 percent of bacteria when it's used to rinse and soak produce. -NPR.org

Are you in LA and looking for roaming snack carts? Check online to find out where renegade bakers, Treat Street will show up next. They come, they push sugar, and bam, they are gone again. Hot fun in the city.