.
(SCROLL DOWN FOR HOW-TO PICTURES)
supreme v. to remove the skin, pith, membranes, and seeds of a citrus fruit and separate its wedges. Also as noun, a wedge of citrus fruit.

I forget where I was, but I know the Ombudsman was there too, so chances are my forgetfulness can be blamed on the drink...I’m almost certain of it.

So this is how it started.

Someone asked me how to segment an orange.

I corrected them by saying its not segmenting, its supreming. To segment just means to peel and pull apart.

To supreme, well, see above.

And we went through it together. But without pictures, and with the addition of inebriation. Oh, and did I mention all of this was happening on a teeny-tiny orange while I was wielding a 12 inch (that’s right kids. I said 12 inch) chefs knife? Needless to say, it ended sorta almost before it began.
But for you my peaches, I am sober as a judge, and I added pictures. What a clever girl am I! Pictures let us not forget, have been noted to be worth a thousand words. As of this moment, I am at 189, so I think its best time for the pictures to take over. What say you?
Alrighty then, here you go! How to supreme an orange:

Begin by choosing an orange, grapefruit or any other segmented fruit (your other choices elude me currently. Oh yes, lemons and limes.) this also is a great way to cut up melons. 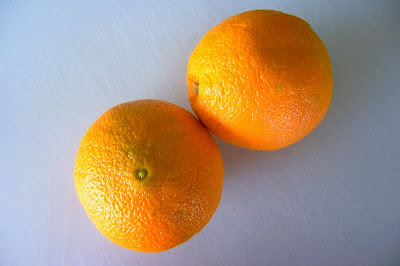 Using a small paring knife, slice off the top and bottom, to just expose the pulp. 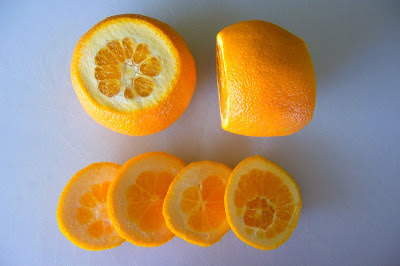 Start at the top, just where the pith (white part) meets the pulp and slice off the skin, following the curve of the fruit. 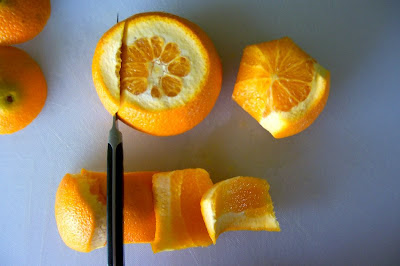 When you are done removing the peel, slice out each segment by cutting in towards the center of the fruit along the membranes/walls. Remove the now supremed segments. 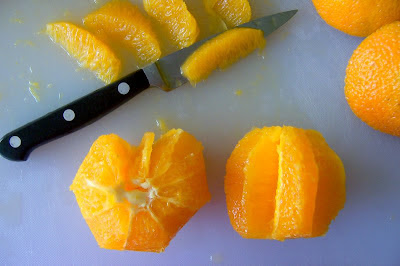 VOILA! That's all there is to it!

And tomorrow my sweets, I will share a recipe that actually makes use of this silly technique.

Wanna know the best time to slurp your noodles and when that might not be a good thing? Check out this site. Don't Gross Out The World.

The origin of the grapefruit poses a bit of a botanical mystery. Its appearance and flavor indicate that it's a hybrid between a large, sour citrus fruit called the shaddock (Citrus maxima) and the sweet orange (Citrus sinensis). - Hungry Monster.com

Important skill to master. I prefer blood oranges when available but valencia are fine. The pictures make me crazy - they're so good!

if you cut the peel around the curvature of the fruit (rather than straight down), you will waste far less of the fleshy goodness.

Yes, Anon, that is why I said "following the curve of the fruit."

To supreme (segment) an orange is straight forward. How does one achieve the same with a mandarin or tangerine ?

Rachael - I just linked this page to my blog 'Orange Cranberry Quinoa' to show the readers how to Supreme. Thanks!
Ann at
2hungrytravelers.blogspot.com