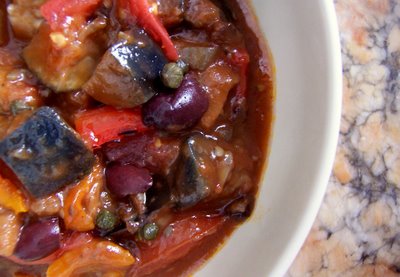 Oh kittens, you so wish you had been there!

I certainly made enough food…there were leftovers for days.

Which was kinda the idea.

Moving in to my third house in this calendar year (Eek. Sigh. Can you imagine? For pity’s sake and all that business) was quite the experience. But the result is bliss. Total bliss. I am home.

But you are here for the food more than my silly rambling (or are you?) so I will share a glorious treat with you that was the very first thing I made in my bright n’ shiny-new kitchen.

Did I mention that I am blissful?

Eggplant caponata. A Sicilian eggplant dish that is the ideally complimentary to bliss.

Like life, it is sweet, bitter, salty and sour, light and filling, perfect warm, and perfect cold. In other words, balanced. The way every day should be.

Considered an appetizer or side dish, it can also be eaten with rice, or over noodles, room temperature with crackers, or stewed with chicken. Then again the simplest slice of country bread is really all it needs. Utter bliss.

Try it and enjoy.

In a large pot with a lid, heat the oil over a medium flame. Add the diced eggplant and toss to coat (absorb).

When slightly cooked, (six minutes) add the garlic and onion and toss to coat. Continue to cook for 5-7 minutes, stirring once or twice to brown.

Add the rest of the ingredients, (except the parsley) stir and cook, covered, for about 25 minutes. Taste and adjust seasonings if needed. You are looking for sweet and sour balance.

Male eggplants tend to have fewer seeds, and are therefore less bitter than female eggplants. To sex an eggplant, look at the indentation at bottom. If it's deep and shaped like a dash, it's a female. If it's shallow and round, it's a male. - What's Cooking America.net

Sweden is now the highest per capita consumer of Mexican food in Europe. Explaining why in 2001, the Swedish Nordfalks spice company changed its name to Santa Maria, after its most successful brand. Interestingly, Mexican food wasn't brought to Europe by Mexicans, it was introduced by American companies. Most European grocery stores sell Mexican food products made by companies such as Old El Paso, part of General Mills, the same company that brings you Cheerios and Hamburger Helper.

Comments:
yum! I've been obsessed with eggplants lately. Congrats on the new place.

Thank you for sharing this recipe! A Swedish foodblogger wrote about caponata yesterday and I was just about going hunting for a recipe. Now I can hunt other things instead...
So glad to hear you have found a good place at last! In Sweden an old tradition is to bring porridge to people who just moved in somewhere. I would bring you some if I could!

Oh, I am SO MAKING THIS! Reminds me so much of the summer spent in Sicily with a sexy Navy JAG and the best evah eggplant and tomato dishes . . .but I digress :)