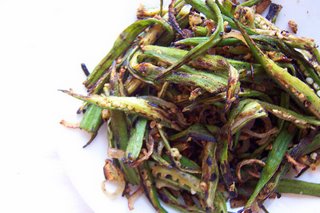 I swear, suddenly I'm all "edu-ma-cational" and whatnot on this site!

So I'm just going to wow-pow you with a recipe to make (practically) slime free okra, and I'm not going to yammer on and on about what makes it slimy and oh how faboo it can really be.

Either you, (my dear sweet peaches,) are or are not going try this recipe. Urging from me, well, it will be minimal.

I'll just say one thing. TRY THIS, IT'S REALLY TASTY!

Cut the top off of each pod of okra then slice lengthwise, then lengthwise again. You want strips. Toss with the flour.

In a large (non-stick if you have it) wok, add the oil (there should barely be any) and heat over a medium high flame. Add the okra and toss to coat.

Reduce the heat to low.

Add the rest of the ingredients.

Saute for 10 minutes, until browned and slightly crispy.

Remove from heat and serve.

Makes enough for four as a side dish

The roots of the marsh mallow (Althaea officinalis) were the source for the original marshmallow candy, made by boiling the soft inner pulp from the roots with sugar until very thick.

Lady's Fingers is another name for okra. This name only dates back to the early 20th century, and originally applied to a small variety of okra.

Comments:
What a fantastic way of preparing okra! I have never seen it cut into strips before. I love okra so much and try not to let the slime deter me, but I sure could do without it. Is it the high heat that does the trick?

Love okra. I grew up eating lots of okra but never have i seen it prepared this way. I want to make some pdq!

Oh, and it must be the best okra photo i've ever seen so far :) great job!

I've only had okra a couple times...I'm afraid of the slime ;)

Anna - I think its the flour, it absorbs the slime..and the slow cooking.

Mae - You're making me blush! Thanks!

AND you know I say that with Love! :)

Looks really yummy, I am going to try this now. I love okra.