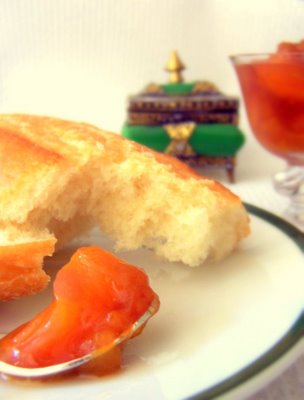 No doubt about it, I am what is classically known as a dizzy dame. A spacer. Even flaky at times. Whatever phrase you want. It’s just a fact. Doesn’t bother me.

Wandering around the Hollywood Farmers Market last weekend, I was so overwhelmed with choices I ended up sort of standing in the middle of the street staring ditzily at the trippy kaleidoscopic wonders covering the tables. Sunshine and peppers in every hue, the scent of lavender and bountiful apples, it would stop anyone in their tracks. (Except apparently, all the people bustling around me...oops.)

After drinking it all in for a few moments, a man at one of the fruit selling booths across the way caught my eye. Probably because he was gesticulating wildly in my direction.

Momentarily brought out of the clouds, I floated over to see what he wanted. Hippy-dippy smile plastered across my face.

Apparently my aura had been shining in a bright and golden way (his words, not mine, but who am I to deny such a compliment) and I needed to take a large bag of his finest overripe and under-glamorous nectarines to cook with and maintain that special glow. (Seriously, that was what would you have done! He was adorable.) Free of charge. Now that’ll make a girl glow, eh?

While I’m not sure the nectarines were the key to retaining the special light of that morning, they certainly didn’t hurt either. Blemished and browned, they were redolent with that heady scent that drives me wild. It permeated the car as I drove home in the heat and filled my mind with wonder.

He had said to make jam. I did as I was told. Simple and unadorned. Sometimes that is just the way to go. And while I’m not sure if my aura is still golden, I know my thoughts are.

Try this with the last vestiges of stone fruits in your area and enjoy.

Remove the pits from the nectarines. Cut off any really brown spots and roughly chop them into chunks. Add to a large stock pot with the zest, sugar and salt. Add enough water to come half way up the fruit. The pot should not be too full. If it is, take some of the fruit out. Boiling sugar overflowing will make a horrible mess.

Boil over medium heat until thick. This may take an hour. Stir a few times during the process.

When it is done, fish out the lemon zest. Now you can strain it or not. I wanted it more rustic, more au natural, so I didn’t and it was fine. More than fine.

A nectarine is a fuzzless variety of peach. California grows over 95% of the nectarines produced in the United States.

Jam is a type of fruit preserve made by boiling fruit with sugar to make an unfiltered jelly.

Jerome Monroe Smucker first pressed cider at a mill he opened in 1897. Later, he also prepared apple butter, which he sold from the back of a horse-drawn wagon. Today Smucker's – a family owned company - is the market leader of fruit spreads, ice cream toppings, health and natural foods beverages, and natural peanut butter in North America

Comments:
I refuse to believe that someone who writes such thoughtful blog posts is a flake!