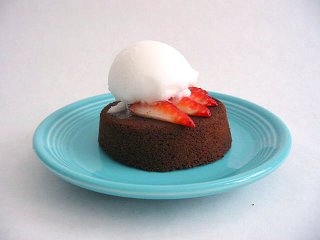 Boy howdy. It sure has been quite awhile since I took part in an online event. For some reason or another, a few months back, I sort of decided I was over it. Too many events, not enough time probably. Then of course, this week, I noticed IMBB27. (27!)

IMBB (And in case you are wondering, no, I’m really not sure the point of the moniker) is a fun little online thingy-ma-doo where kids just like me all around the world bang out something based on a single idea or ingredient, and this time it was (oh boy) the Joy of Soy. Not just soy though, soy desserts. As a huge fan of that amazing little green bean, well, I just had to join in on the fun! Plus, I love seeing what other people pull out of their bag of (recipe) tricks.

I figured the most obvious thing to make (and therefore what everyone else would be doing) was tofu cheesecake, so I opted out of that. Besides, if it came out icky, I would be all kinds of pouty. Nothing gets me down like having to toss out a cheesecake, even an icky one. Next stop was chocolate cake. Simple, decadent mini-cakes.

I sort of just concocted this without giving it a lot of thought, just using what I had on hand. Soy milk, (natch) organic cocoa powder, sugar and flour. The batter was so sinful, I was over the moon with excitement. (And if I must confess, I ate quite a bit of it. Doh!) The finished product, well, it was also quite good, but part of me thinks I was spoiled by trying it unbaked. Hee. It has a nice crumb, and a rich chocolaty taste for sure. Overall, I’d say it’s a winner indeed.

It’s a pretty basic cake. Took about 10 minutes to pull together and 35 to bake. As for the sorbet, well it was so simple I feel like maybe giving the recipe is silly…just add a cup of simple syrup and a teaspoon of vanilla to a 16 oz. can of coconut milk, then freeze per your ice cream makers directions. Easy peasy as they say. And vegan to boot! (That is if you are the type of vegan who eats white sugar) Serve it with the cakes, or on its own. Either way, you will be giddy with happiness. I should mention, I served this with strawberry slices and a sauce (not pictured) made with melted dark chocolate and a touch of corn syrup, to keep it fluid.

When the finished cakes emerged from the oven, my darlings Ms. McGee and The Ombudsman came over to take a nibble, (and make me giggle) and they both gave this fab dessert a hearty thumbs up. The chocolate inside gooey-ness sent them over the top. And those be two discriminating kids. So why don't you try this too, and enjoy!

In a small saucepan, combine the chocolate, soy milk and butter. Stir to combine. Set aside and let cool completely. This is your ganache.

In another bowl, mix together the sugars and oil. Add the soy milk and mix all that together, then add to the dry ingredients.

Using a large muffin pan or ramekins, (both buttered, or oiled) add enough batter to fill each well 1/3 of the way. Dollop in a bit of the chocolate ganache, top with more of the batter to about ¾ full.

Bake on the middle rack for 30 minutes. Remove and allow to cool.

The Food and Drug Administration has approved the claim that 25 grams of soy protein a day as part of a diet low in saturated fat and cholesterol may reduce the risk of heart disease.

St. Louis-based Solae LLC has come up with a patent-pending invention called SoleCina that involves both the process and the ingredients to produce either a "hybrid" meat - part soy, part real meat - or a completely meatless food that tastes like chicken, beef, pork or turkey. The company said both versions taste - and feel to the mouth - much like real meat, but are much healthier. For example, a hybrid burger dubbed the "Better Burger" by Solae has two-third the calories and half the fat and saturated fat as a burger of comparable size. SoleCina has been in the works for a decade. Solae is a $1 billion food innovation company that specializes in soy protein - the company has more than a 50 percent share of the world's isolated soy protein food ingredient market. It makes soy-based ingredients found in hundreds of grocery store products, including food bars, beverages, snacks and meatless alternatives. - ClarionLedger.com

Comments:
this looks terrific! my soy dessert was also chocolate. :)

holy *ish*, girl...chocolate soy! you are a wonder. wonder i say!

Ooooh - great submission. I participated for the first time this month and am loving the other recipes. I adore coconut, great pairing!