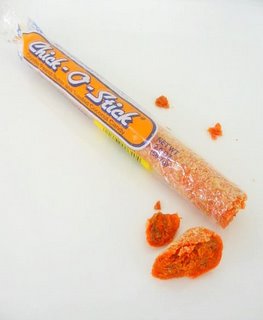 I got back from Vegas with my liver in-tact on Sunday morning, so Boston-Boy and I decided to drive up the coast with the vague idea of finding strawberries in Oxnard. (Mostly because that's where they come from.)

It was another beautiful day (ah to be a cliché) and we certainly got our fill of sunshine and laughter. But this is not a post about vistas and fruit (Besides, I really have to dash out and buy some butter before I can do much other than devour them at this point.) it is about something not found in nature. This post is about my most favorite candy...the ever-elusive Chick-O-Stick.


I just felt it was high time I said something to promote something that brings me so much joy.

Now, a lot of interesting food-stuffs come from the great state of Texas, but this one, well, it takes first prize in my book…

Made by the family owned Atkinson Company since 1932, using some sort of patented process (wow, amazing!) a Chick-O-Stick (and you have to read their site to explain the name, okay?) is pretty much the best cellophane wrapped thing you will ever taste, ever. Yes my peaches, it’s that good. If you are unfamiliar, it is sort of like the inside of a Butterfinger candy bar without the (sorry to say) cheap chocolate and with the addition of a dusting of sweet coconut. Florescent orange, shockingly brittle layers of peanut, coconut, salt, sugar that crunch like nothing else - well, the bits that don’t glue your molars together that is. Can I get an Amen! Boy howdy, it is good. It may break your teeth, it could induce cavities, but no matter what, it will taste fan-flipping-tastic.

So basically, this post is my ode to the (vegan delight) Chick-O-Stick. A Texas-born candy treat I have only encountered in gas station quick-marts on long, lonely stretches of highway, and something that when found simply must be coveted and adored.

Kids, if this is candy nirvana then I am on the path of enlightenment, because I honestly cannot pass one by. I suggest you take the same route – just hop on the nearest interstate, stop by an out-of-the way snack stop, find a box, lay out your change and indulge. At less than a dollar (I paid seventy-five cents) it is the bargain of the century.

Find some, buy some, and enjoy.


Apropos of nothing, you really should click here and check out Liam’s hilarious Shoes video…

The melting point of cocoa butter is just below the human body temperature — which is why it literally melts in your mouth.

Americans over 18 years of age consume 65 percent of the candy that’s produced each year.

Comments:
I don't know ... those look kind of scary. On the other hand, I am now craving a Butterfinger, cheap chocolate and all.

KT - They are TOTALLY scary...especially since the wrappers are usually covered in dust, and there is no expiration date on them (that I noticed)...and yet, they are DEEEEeelicious. Mmm. Mmmm. Mmm.

Wow! I have not seen one of them in a long time!

I'm headed to Dallas next week for business. Do I have to find them on an interstate there...or might I find 'em in the hotel sundry store?

You are the official Chick-O-Stick locator, right? :)

Being a Native Texan, I was raised on Chic-O-Stics and Peanut Butter Logs! I you haven't tried the PB Logs, you should. They will become your 2nd favorite candy!

You get an amen from me! I'd forgotten about those scary-orange rods of goodness!

They're my favorite candy as well. I eat a few bags of them a week. Oh well. (;

First time I ever ate one of these was when I was a kid visiting Chicago. Ever since then-- I rarely see them on candy shelves, but when I do, I snap up a few. I just love 'em.

A couple of months ago, I had a craving for one-- and well, every single freaking store I have ever been in does NOT have them (Milwaukee, WI). I tried asking friends and family if they've seen them anywhere, and I get a blank stare back like I just asked them if they've ever seen bloody organs for sale at a gas station.... (and no matter how hard you try, you just CANNOT properly explain what a chick-o-stick is...).

This morning I finally gave up waiting and ordered an entire box right from Atkinson. I can hardly wait- WOOHOO!