When fantasti-hostess Sarah suggested Tapas for this edition of dine and dish, I thought I should email her sassy self and make sure we wouldn’t be hitting the same spots. Then I remembered the girl never travels more than a mile from her Westside digs and I got over it. (Why yes Sarah! That was me mocking you! Drive east young woman! Drive EAST! You can do it! Don’t be afraid!)

The options for tapas here in LA are seemingly endless. With old stand bys like Cobras and Matadors, tequila happy hot spots like Malo (which I frequent with some frequency) and new trendy establishments like Eat, it was a hard choice…sort of.

(Now this is the part of the story when I bring in Miss Sarah’s other influence in my life. Dang I adore that girl!)

I have a dear, dear friend, who I refer to as the Ombudsman. He is a peach of a man (and I will add that he is NOT nice or cute, but he is all kinds of dangerous and sexy as hell) and he and I go out to eat on a pretty regular basis (his GF resides 500 miles north. I like that.). Trouble is, when on the spot and challenged with “where do you want to eat” one of six places always end up being presented. While they are all fantastic, they are all DONE. We have eaten at these spots so many dang times, we don’t even look at the menus any more. Yawn.

So taking a cue from Delicious Sara, we wrote a list of places we want to try/revisit. 3 restaurants in 5 neighborhoods. Each. It was a daunting task, but fun.

It was from that list that we ended up at the proud-to-be-family-owned Cha Cha Cha in Silverlake. (The original is in West Hollywood) A hot spot for California Caribbean tapas and more. It was number three on my list and five on his (what can I say, great minds, thinking alike...or something) And just to give you and idea, the last time I ate there was Sassy-Stand-Up’s 24th birthday, and I’m pretty sure, the lass is pushing 29 these days.

While not a typically tapas kinda spot there is a whole tapas section on the menu brimming with tasty delights to choose from …so lets get to the review shall we!

First off, Cha Cha Cha is in an uber-hipster neighborhood. Shabby, gentrifying quirkiness. Its not dangerous at all, but it could use a good once over with a sand-blaster for sure. (The neighborhood, not the restaurant)

The interior is all kinds of fun. Funky Caribbean catholic-voodoo décor. Lots of tropical colors and chile pepper lights. The lighting is low and there is a great heat to it all.

Once seated, I had a glass of their famous red wine sangria, and the Ombudsman opted for a Red Stripe beer. He likes his beer, I love me their sangria.

I admit, the whole slew of food was a bit carb-heavy, but heavens was it ever good.

The mushrooms were by far my favorite. Just a big bowl of dark brown liquid with (cold) steeped shrooms hidden beneath. They were strong and garlicky and just right. The marinade was perfect with the classic Cuban style white bread rolls that are endlessly refilled to a waiting basket.

The pizza, with about six smallish slices, was insanely good. Dense chewy crust, creamy white gobs of tangy goat cheese, and whole cloves of braised garlic over a spicy red pepper sauce. It was the only thing we brought home, and the smell that filled the car was divine…

The corn chowder was thickish and creamy, it had lots of corn and was spicy as hell with so many minced jalapeños in there. It was advertised as such, so I could hardly complain, but I didn’t eat much of it for fear my tongue would blister.

Inside a festive coconut was a massive serving of seviche, which we both adored. Light and refreshing, the seafood was a good blend of snapper, salmon, scallops and shrimp. There was also a lot of mango and other fruit, chiles and onions. Lucky thing neither of had kissing planned for the night, because between this and the pizza, it would have been quite the turn off.

The tamales were a bit of overkill (I will state that again when I mention the fries) but lordy were they good. Thick cigars of light corn that was exceptionally well seasoned, they are served with glistening black beans, sparkling salmon roe and a light sour cream to top it all off. I wanted to devour them all.

I just couldn’t resist the thick cut spicy fries they serve, so those were on our menu too, but sadly, I could only eat about two since we really had gone a bit mad with the ordering. They were super good though!

Oh, and The Ombudsman had tortilla soup too. He liked it. That’s all I could get from him. Sorry.

So there you go. Cha Cha Cha is an outstanding place to get together with friends after work or later and nibble on some interesting, spicy tapas. I love the festive atmosphere and vibe. Try it, and enjoy!

Review from Zagats: Nothing says “festive” like this “funkadelic” Caribbean duo that keeps revelers on their toes with the “happiest of happy hours” and some of the “best jerk chicken anywhere”; whether you two-step into the Silver Lake original or the West Hollywood branch, the “congenial” staff and “voodoo-esque” decor keep things “sizzling”; sure a few party-poopers “aren’t thrilled” with the food, but “one sangria and you’ll be cha-cha-cha-ing all over the place.”

Snappy Salads a chain based in Dallas, Texas is a ecology-oriented fast food restaurant that features biodegradable utensils and aprons made of hemp. Their menu includes organic produce, hormone-free beef, free-range chicken and fair-trade teas.

Believers say that true Cuban bread cannot be found outside of Tampa or Miami. Cuban bread is best when it is eaten on the same day that it is made, as Cuban bread contains lard. After a day or so, the lard hardens, and the bread gets dry. – What’s Cooking America.com 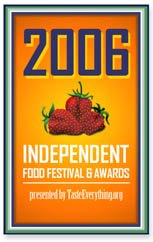 Welcome one and all to the Second Annual Independent Food Festival Awards! A kudo-fest devised to give recognition to anyone or thing us food-blogging judges deem worthy, as brought to us by the every-delightful TasteEverything.org. A cause I can get behind for sure.

As some of my more loyal readers may recall, I actually designated an Independent Food Award last year, only at that time I hadn’t exactly been asked to judge, I just sort of went for it, guerilla style. What can I say, I'm a cheeky girl, I had an opinion and I wanted to share.

This year though, I am an official judge (and jurorist) and am honored to be part of this event. So with no further ado, I give you the 2006 Independent Food Awards Winner for

Finest Juice Imaginable (From a Company With a Heart)

What is CurrantC? It’s a luscious, refreshing, deep purple, real-sugar-sweetened, juice brought to you by proud NY Farmers on a mission.

Mission you ask? Yes, mission, to bring back real, antioxidant-rich currants as a cash crop, support local agriculture and introduce people to a fruit that for more than a hundred years was banned in this country (In 1911 the plant was fingered in a blight scandal and banished to protect the timber industry.) but due to their diligence and passion, has recently been re-introduced.

Now, I’m not a journalist or a scientist, and certainly cannot back their health claims…no, I’m just one girl with an opinion and a public forum to air it in - so having read their website, and tasted their delicious beverage, I can say with all honesty, this is a product and a company worthy of our attention.

The juice they blend is the color of the sky after twilight; it has an intense jammy-berriness, a subtle hint of tartness and a clean – adult - sweetness that doesn’t linger, allowing the purity of the bold fruit flavors to come through. It is perfect chilled, and lends itself to a wide assortment of recipes from salads to desserts. In a nutshell, it is, indeed, a tasty and versatile beverage.

So there you go kids, my choice for the 2nd Annual Independent Food Awards. It wasn’t such a hard choice since I love a company that is doing something for a reason, and doing it well. I hope you will take a moment and check out their site, and find out if they sell their divine elixir somewhere near you...try it, and enjoy!

In the interest of full disclosure, I must confess, after I first drank down a bottle of yummy CurrantC, (that I bought at the Whole Foods in Beverly Hills, btw) I wrote an email to them saying how much I liked it – mind you, I had already decided to give them this award at this point – because Im just the kind of girl who does that sort of thing. It just so happened, that in response, they most kindly offered to send me a case, which I accepted, and distributed to friends and family. Everyone enjoyed it and are converts. So thank you CurrantC!

Dried currants are not the same thing as fresh currants. Dried currants are actually small raisins - the dried fruit of the Zante grape, originally from Corinth, Greece. Fresh currants (red, pink, black and white) are the fruits of plants in the gooseberry family, genus Ribes. - Food Facts and Trivia