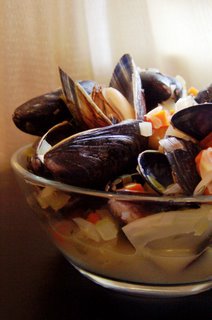 In the great cliche of our times, I have more than my fair share of friends that I cannot for the life of me find a spare moment to get together with, and it bums me out to no end. Recently I called the oh-so-hard-to-pin-down Rock Goddess to see what she was up to; while simultaneously deeply craving Moules Frites. Well, I almost fell over with shock when she not only picked up the phone, but suggested we go get some...right then. This being a few weeks ago, I had not yet aquired my new toy, the web-ready (read, Zagat on hand at all times) cell phone/camera/not an ipod (seriously, why can't I download music to that thing?) so while it seemed logical to just hop in the car and head out, things just couldn't be that easy.

Using our powers of deduction as to who would offer such a delight, (Somewhere French we reasoned. Or a seafood place. One, either, both, right?) and we traipsed off to the super fab French bistro, Cafe Stella, laughing all the way...until we got there and lo, it was closed for lunch on Mondays. That's ok, we'll find something, the ever upbeat RG said, (well, I paraphrased) as we hopped into her fantasti-classic Mustang and roared off back towards Hollywood and our next try, that bastion of seafood, The Hungry Cat. They could help us out, right? Alas, shut out again. We just kept wondering why there is no equivalent to the oh so chic San Francisco mussels hot-spot Plouf here in La-La Land (Why! Why!), but consoled ourselves knowing they are probably closed Mondays too.

Confident there was a solution to our cravings out there, we continued on our merry way. Lunchtime traffic held us prisoner for about another hour, but at long last we ended up (wait for it) at the Third and Fairfax Farmers Market, seated uncomfortably close to a has-been actor and the lips he is married to, drinking in the sunshine and some fantastic sparkling wine (sorry, forgot what kind) and it was as if a dream had come true. A quest fulfilled, and it was the best feeling ever. Good friends, good food. Mission very much accomplished, and we didn't have to drive to Malibu (read: far) to do it.

The mussels were plump and briny, the wine chilled, the frites liberally doused with sea salt and thyme and the company, well, hilarious actually. After indulging we happily ambled through Monsieur Marcel, the French/European specialty foods market I so often visit, and agreed that life is indeed, good.

If you too want to get silly with bivalves, here is my favorite super-flash-fast mussels recipe that you can do at home. It is superb if you like the taste of fennel. If not, leave that and the Pernod out and you will still have a delightful dish. Try it, and enjoy. 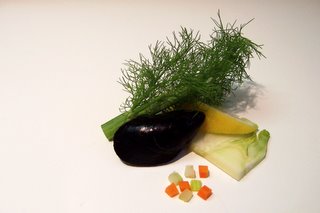 Mince your carrot, celery and leek (I cut them into brunois. That is a little time consuming, so if you aren't there, its all good) and saute them in the melted butter in a large soup pot (that has a lid) for a few minutes. Add the tarragon and sliced fennel and stir. Cook for another three minutes. Add the mussels, lemon and the liquids, cover, give the pan a shake and wait, oh, say, four minutes. Open, stir and make sure all the mussels are opened. Discard any that aren't.

Using a slotted spoon, remove the mussels and the lemon wedges. Sample the remaining liquid and adjust seasonings to taste (I add some pepper and maybe another pat of butter), simmer for another minute or two over high heat. Pour over the mussels, (trying to leave any grit behind) and garnish with parsley and some fennel fronds. Serve with crusty bread.

Despite spending $1 million in the last two years to assure Los Angeles residents that their tap water is not only safe to drink but also top quality, city officials spent $88,900 in public money during that time on bottled water. ($31,160 on Sparkletts.) "I am stunned," said City Controller Laura Chick, whose office compiled the bills. "This is the same department which spent millions of dollars for public relations promoting themselves and the quality of their drinking water." The DWP spends about $500,000 annually to mail a report on the quality of its water to its customers, as required by federal law, according to Jim McDaniel, chief operating officer of the agency's water division. The latest report brags that DWP water "meets or surpasses all water quality standards." - LA Times Jan 3rd.

The Pyruvate Scale measures pungency in onions and garlic. It's named after the acid in onions which makes cooks cry when cutting them.

Comments:
You should have tried Cafe des Artists. They ahve mussles. Good ones.

Thats a really pretty picture too. thanks for the post.

LOL. We thought of that place, but I forget why we nixed it. Im not sure RG is willing to park her car in that hood...something like that. Or maybe they were closed too. I cant recall. Thanks for the idea though, I will have to remember that next time the mood strikes.

Ooohh, yums. I love mussels. I used to go to a little cafe near my studio and have a bowl of moules moulinere with a nice glass of wine. Perfect way to spend my afternoon before I started teaching. I will definitely try this recipe.

Mussels are definitely one of our favorites in the shellfish family. Just realized I didn't have you in my list of blogs - added now. :)

You didn't come out and say where you actually had the mussels...I assume Marcel's but it could have been Morels. Marcel's are way better- Morels is very very salty.

Jay,
Excellent point! It was Marcels. I have never had them at Morels. Thanks for pointing that out!

Hi Rachael, thanks for visiting my blog again. I just came back from OZ & NZ, and I found amazingly good mussels in New Zealand. Every grocery store there sells smoked and marinated mussels, and I especially loved the smoked BBQ ones. Other varieties were plain smoked, garlic marinated etc. So yummy! The mussels are called Greenshell, Green Lipped or Green Bearded (Perna canaliculus), and are native to NZ. They were like seafood chicken wings. I'll definitely try to replicate them with the blue mussels available here in Finland. Cheers, Antti from Doughboy

Hi! Stumbled over your post on the hunt for some original moules recipies on google. Your one is now cooking on the stoves behind me and by the smell only my hope is up. Perfect friday laid back dinner for my wife and I, thanks from Sweden!