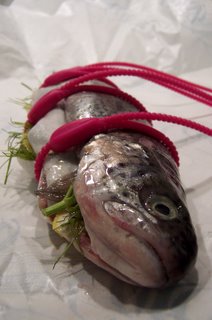 You've seen them too right? Those crazy pink Food Loops? The adjustable silicone trussing straps that are oven safe to 675F/370C? I sure had, and when I ended up with a set recently, I just could not wait to try them out!

For my first experiment, I decided to make a basic stuffed trout, mostly because I wanted to start with something relatively easy that I wouldn't be upset about wasting if it hadn't worked out.

The Food Loop set comes with six loops, in an excellently vivid shade of pink that I suppose was chosen so they won't get lost in a drawer, or accidentally eaten (though, they would be pretty tough!). They also come with a small mesh storage bag that is dishwasher safe, which was a great thought on their part.

So what did I think? Well, they are without a doubt, absolutely clever in their design. They are long ropes basically, that are easy to handle and really do clench tightly and get a grip on the food. All of that without getting slippery-slimy they way twine does. I was also happy to learn that they cooled quite quickly after I took the fish out of the oven, so I could grip them with my bare hands to get them the heck off my gorgeous fish!

What I didn't realize ahead of time was that they are also pan safe, and I could have crisped the skin a bit in a skillet on the stove top first, but even without doing that I was super happy with the results.

The drawbacks? There is a bit of bulk you just wouldn't get with regular twine. The fish just couldn't lay flat on the side with the teardrop shaped end. I also had a bit of trouble turning the fish, again because of the bulk and also the extra length of loop that was sort of in the way. That being said, I wouldn't even consider that such a bad thing, since it is so outweighed by the pros. 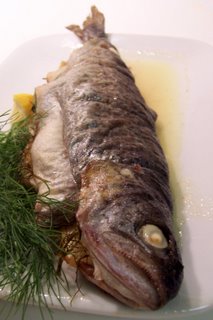 So, if you want to try trussing with these fun little (FDA approved!) loops, I say go for it! To get you started, you can go with this recipe I made, its mind bogglingly easy and sumptuously delicious. Flaky, flavorful and easy as pie to make. Six ingredients, some Food Loops, 15 minutes in the oven and an elegant dinner is served. Try it, and enjoy!

Preheat your oven to 400F

Slice the fennel bulb as thin as possible. Mince the fronds. Scrub and slice the lemon into thin rounds. Mix the fennel, fronds and lemon with some salt and pepper.

Sprinkle some of your rice flour (or if you can't find that, regular flour will do) on a plate and dredge each fish lightly.

Now stuff the fish as full as you like with the fennel and top each pile with a pat of butter.

Truss with kitchen twine as normal or with Food Loops.

Place on an oiled baking sheet.

Bake for about 15 minutes, flipping once to ensure even browning. Remove from the oven and let cool slightly. Remove the loops, fish out the lemon slices and serve (with or without the heads!) with the sauce that has pooled in the pan.

Gladstone's of Malibu claim they serve "the largest selection of fresh seafood on the West Coast."

Tomatoes are available by request only at Wendy's restaurants, a short-term policy that began in late December because of crop damage from hurricanes in Florida. Hurricanes made 2005 one of the worst years in recent memory for agriculture in Florida, which supplies more than half of the nation's fresh vegetables between November and February.

Comments:
Oh man, I'm green (or hot pink?) with envy! The Food Loop is just SO cool! I hope they come to Sweden - soon!!

You know I'm not one to turn down a gadget but, really, can we not tie knots? Would it be so hard to pull out a length of kitchen twine and truss the little buggers to within an inch of their dreamy little eyes in half the time it takes to finagle with these things? I'm hilariously suspicious of anything new - it took having a baby to finally break down and buy a microwave oven. I saw them recently in one of the catalogs and wondered how they'd work. Thanks for your mad experiment.

Champurrado-
Well, for one thing, they are reusable, so that saves a tree or two I suppose. (Or, whatever twine is made of) Plus, with twine you always run a risk of it catching fire (its happened to me) So right there, two reasons to have them. Plus they take up less space than a big old ball of twine that inevitably gets unspooled!

Wow, I think I just sold them to myself all over again! LOL

Hello
They look great! I wonder if they will come out in OZ.
That trout looks really yummy!

Fish in bondage, huh? That gives a food blogger something to think about. \;+)

Actually, a great idea. Couldn't you have put the excess at the "spine" of the fish, so it wouldn't have been on either side?

cant wait too. Wonder if it will make it to Malaysian shore ?

Wow, that's a brilliant idea! I hope it makes it to Singapore too. And the fish looks so scumptious, I am tempted to have fish tomorrow.

I have tagged you for the "Too Much Information" meme! I hope you haven't been tagged for this already.
To find out what you have to do - check out my blog! Cooking in Japan

Did you see their wacky videos?

KEVIN! Those are OUTRAGEOUS! I LOVE it. And am mildly disturbed...LOL

Oh my God those videos are crazy!! How do they get away with showing those? Here is another one I found: