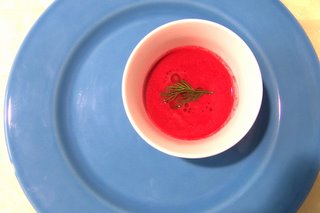 All excited, I called my mother with the news that I had created an outrageously enticing new soup. My mother, you have to understand, is a great deal smarter than I could ever hope to be, she is also well traveled and has led an extremely glamorous life, so when I do something even remotely interesting or clever, well, I just have to share.

Of course, on top of all of that, she is respectful and kind no matter how nutty and out there I sound. So as I went on and on about how unique, delicious and vibrant my concoction was, she just said things along the lines of "Mmm," and "Sounds good honey." When I was finished gushing, with that gentle voice only a mother can conjure, she simply said "Well sweetie, your borscht recipe sounds simply wonderful."

Oh. Right. My borscht recipe. And there I really thought I had made something completely different. What I thought I had made was beet gazpacho. But nope, upon further inspection, I did, in fact, create a soup that has existed for quite some time. Centuries even. Oh well, its still pretty terrific, and worth the effort. I do hope you'll take the time to make a blender full....but now that I know its a Russian dish, I just wonder, would it improve with a shot of vodka in it? Maybe next time. Try it, and enjoy.

In a blender, combine all the ingredients and puree. Taste, and season with salt and pepper.

Let it settle, and pour through a fine mesh strainer.

A study by the Wine Market Council found that American consumers scored Italian wines higher than California varietals on a measurement of satisfaction. The same wine drinkers said Italian and Australian wines were of better quality than Californian, while Australian wines were deemed the best value. The study, released during a presentation about attitudes of U.S. wine consumers, followed a report by New York brokerage Merrill Lynch & Co. this week that said California was slowly losing market share to imported wines. - LA Times

The Irvine California based restaurant chain, In-N-Out Burgers has accused a top executive of fraud and embezzlement. Richard Boyd, who was in charge of building In-N-Out restaurants and is still on the payroll, diverted construction materials and crews to his own property and charged the work to the company, according to a lawsuit filed Tuesday in Los Angeles County Superior Court. Boyd's attorney, Philip Heller, called the allegations "totally baseless and demonstrably untrue." - LA Times

The type of the soup that is named borscht differs slightly by culture. - Wikipedia.com

Comments:
Your mum sounds like a right SCREAM.
(Well, screaming is what I'd be doing if I looked up from my cradle to see that my mother was a Zombie)

I made Borscht once, when I lived in Europe, but 'Beet Gazpacho' has a more Californian ring to it, so stick to your guns. pretend Russia doesn't even exist and claim the invention of it for yourself.

And don't tell me you didn't think to serve it with some kind of juice anyhow. Champagne perhaps?

In my borsjtj soup I use cabbage and potatoes along with the beetroots so at least I will call this Rachael´s beetroot gazpacho!

I once made this thing with phyllo dough, spinach and leftover roast beef, which I had shredded. A few onions, a few herbs, and it was quite tasty. Then, someone asked me for my bourek recipe. Who knew?

Just because someone else did it before, of you didn't know about it, it's still your idea. Right?

"Beet Gazpacho" is a lot more inticing than "Borscht". I'm going to try your recipe soon (as well as the quinoa crusted perch). Recently I made a couscous coated chicken which was delicious so I bet quinoa makes a great coating. Love your blog!

This looks great-- I have to try making it. I don't like the texture of chunky borscht, so I think that hte puree is a cool way to go. Thanks!

Well, your mother may be very smart and well traveled, but she failed on this one...I have been looking for Borscht recipes tonight and after I got excited about one recipe and wrote down the ingredients on my grocery list, I happened to come upon your recipe! How exciting since it's too hot for me to make Borscht! My mom must know your mom since my mom is very smart! but they both must be jealous right now that they didn't think of this! I agree with Sam! Quickly claim it as your own invention! Sometimes we just have to go with our gut...not what our mom thinks...sorry mom...love ya but...time to change my grocery list items! can't wait to try it!!