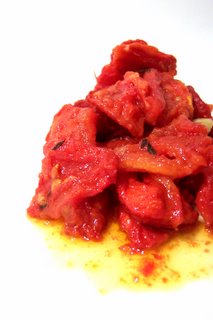 Welcome back to my humble little blog for yet another inspiring (I hope anyway) Kitchen Project. Up this time, the marvelous slow roasted tomato. By breaking down the sugars, and getting some of the moisture to evaporate the tomatoes are denser, meatier, more complex (a word I find is overused in reference to roasting, and yet, really is the most appropriate.), totally multifarious ingredient.

This method truly is the best way to coax the flavor from readily available, yet, not really tasty in the winter time product. The results have versatility is beyond compare. You can use them as a base for many sauces, add them into a stew, or soup, mix in macaroni with cheese sauce, put on pizza or bruchetta, stir in with lentils as a side dish, or use in omelets. The list goes on and on. They also taste amazing all on their own. Mmm. What would you do if you had a jar full in your fridge right now?

You say haven't got any in your fridge right now? Well, my sweet peaches, let's go ahead and fix that.

And before you say anything, yes, it's a long procedure. It is. But that's the idea behind a Kitchen Project. It's something you can do when it's raining out and are spending time in your kitchen anyway lazing a day away. And once you have mastered it, you won't need a recipe to do it again so try it, and enjoy.

Bring a large pot of unsalted water to a boil. Then wash off your tomatoes. 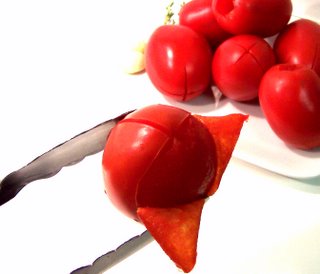 Using a small, sharp knife, cut an "X" into the bottom of the tomato. You are trying to pierce the skin, not really cut too far into the flesh. Then use the tip of your knife to cut out the core/stem end like a cork/plug. Don't cut too deeply in here either.

Carefully add the tomatoes, a few at a time (if you add too many, say more than five, the temperature of the water will drop too much to do what you want it to do) to the pot and let them boil for, oh, say 30-45 seconds. You are not cooking them, you are loosening the skin. When you see the peels curling back they are ready to take out.

Using a slotted spoon or your tongs, remove the tomatoes from the pot and set aside to cool enough so you can handle them. Continue doing this until they are all blanched. Now you should be able to slip the skins right on off. If you are compelled to not waste anything, you can dehydrate the skins in a dehydrator, then ground them to a powder and use like you would a spice. Then again, that's pretty durned fussy. 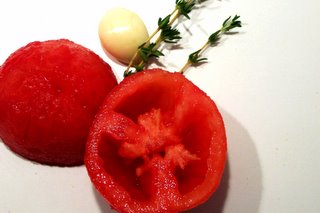 Your next step is to cut the tomatoes in half through the equators, and over your sink, give them a gentle squeeze to get the seeds out. You can totally skip this step, but once you're in, you might as well go for it. If you stopped here, you would have tomato concasse. Worthwhile with sweeter, summertime tomatoes.

Rough chop the now skinned and de-seeded tomatoes. Spread them on the sheet pan in a single layer. Add a few sprigs of thyme, a few cloves of peeled garlic. Douse heartily with some olive oil and sprinkle with coarse salt.

Put the sheet pan into the oven and walk away for, oh, say three hours. Peek in here and again and stir, but other than that, you're golden.

I can't really tell you how to know when they are done other than to say they will be a bit shriveled (Hmm. Now there is a word you don't see often in recipes) and dry. They will not be browned though. The oil at the bottom of the pan will be reddish too.

Remove from the oven and let cool. Store the tomatoes and oil in a glass container with a lid for up to three weeks. They freeze well too.

Concasse/Concasser (French): Tomatoes that have been peeled and, seeded and chopped

Grass scattered with rock salt is more appetizing for to cattle. They eat more and gain weight; Rock salt is used to fertilise soil with sodium, which makes sugar beet yield more sugar.

Comments:
I have always wondered how a tomato got peeled!

Thank you so much for that Rachael - so detailed and precise that I can imagine exactly how to do it!

and summer is coming here so I should be able to get stuck into it!

Oh I love your kitchen project posts! This I will certainly try, we had the most splendid sandwiches in Brussels the day before yesterday with tomatoes like these, in good company with mozzarella cheese, basil and parma ham.

Rachael - I'll ditto your recommendation to invest in roasting tomatoes. After doing 14 trays of slow-roasted (12 hours!!) tomatoes in September, I'd definitely recommend the addition of fennel seed. Now that I'm COOKING with them, the fennel seems to make tomato taste like 'tomato', not the licorice that people fear. Also - I didn't blanch the tomatoes for the skins slipped off oh-so-easily after the time in the oven. I took Cooks Notes http://kitchen-parade-veggieventure.blogspot.com/2005/09/day-156-slow-roasted-tomatoes.html.

Hey sweetness: Thanks for spreading the word of roasted tomatoes. I started making them this summer, when the tomatoes were in abundance. Was I smart enough to set some aside for the dark days of winter, when the tomatoes are so mushy? Of course not! I ate them, in so many dishes. I really never slipped the skins from them, so I'm going to have to try that now.

I LOVE these kitchen basics posts of yours. Now, I make roasted garlic every week!