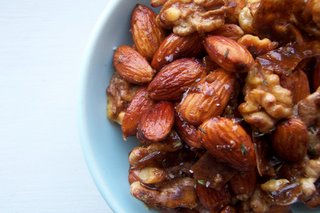 The flight from Los Angeles International Airport to John F. Kennedy Airport in NYC is approximately five hours and 22 minutes. Tack on the hour given to get through traffic to the airport, the two-hour-in-advance security (what a joke) check, plus the thirty minutes to get my bag at the other end, a 25 minute cab ride then a two hour Jitney ride (the worlds most silent form of transportation. It's beyond odd. The coach is packed, and yet no one breathes a word. Then, the ticket girls pass out chips and water. And you stare at the chips, and might even want the chips, but NO. That would break the eerie silence. It is pure torture.) and ten minutes to Auntie Shesh's house, and let's just say that by the time I am there, I am ready to lay my little head down and pass out until I have to turn around and go back.

If that sounds like I'm complaining I am not. It's all worth it to be somewhere wintery for a fun holiday with my family who I so adore. I could have stayed home and gone to Auntie O's house, but this year I wanted to go east. So back to my flight. I get my seat assignment. The flight is sold out/over-booked. The woman behind the counter, giddily tells me the man I will be sitting next to is cute, and she "thinks" might be a celebrity of some sort, but she isn't sure. I blush, thank her, and retreat.

The next two hours I sit wondering what celebrity she meant. If it is going to be someone super good, I may have to struggle to maintain my composure. Then again, anyone that good would be on a private jet, right?

My flight is called and at the last possible minute I climb aboard and scan for my seat and for who I will be sitting next to. My eyes land on him, and thankfully he is looking the other way. My heart skips a beat, and not in a good way. I would recognize the back of that head anywhere. I panic. I look around wildly for another seat. I contemplate swapping out for a middle seat in coach. This is awful! 5 hours and 22 minutes next to this man? (And no, it's not Carrot-Top. That would have been a simple fix. I would have rebooked my flight.) This man is no celebrity! (Infamous in some circles, maybe, but that's about it) This man is my ex-boyfriend. What are the odds.

I retreat to the galley, explain everything to a very sympathetic flight attendant, who graciously agrees that is not who I want to be next to for the next chunk of my day. She discreetly starts asking other passengers if they will swap with me, deviously explaining I am a touch ill and need to be nearer to the front of the plane. (Bless her heart) Finally a deal is struck, a woman casually relocates and I sink into my seat, buckle in and pray he doesn't notice me. I am so not in the mood for his charms. He does of course spot me, (foiled!) and comes over after the meal to say hello, I was able to smile bravely and it was over in no time. I was relieved, and ordered another glass of scotch. My annoyance and shock melting away like the miles between us.

Now, none of that has anything to do with the spirit of the holiday, or even food. I just wanted to share because it was so bizarre. So as a consolation, here is my recipe for warm, spiced nuts. Not at all like what they serve on the plane...in fact, much better. Sweet, hot, salty and delicious (Not just a recipe for cocktail snacks, it's the recipe for my ideal boy! Ta-dum!) try this quick recipe, and enjoy.

Add the nuts to a large saute pan over high heat. Shake vigorously to lightly toast. After 2 minutes, reduce the heat to low. Add the butter, let melt and stir to coat the nuts. When coated, add the rest of the ingredients, stirring constantly for another 2 minutes.

Pour the hot mixture onto a sheet of parchment paper or a cool non-stick baking sheet. Stir as it cools. The sugar-butter mixture will harden, don't worry, just break it up.

Serve immediately or can be kept in a sealed container for up to three days.

California walnuts account for 99 percent of the commercial US supply and two-thirds of world supply. The first commercial plantings in California began in 1867 when Joseph Sexton, an orchardist and nurseryman in Goleta, planted English walnuts. - Walnuts.org

Goat meat imports to the U.S. jumped about 140% over a seven-year period ending in 2003. Now some California farmers see gold in goat. They are expanding their herds, hoping to cash in on consumers' broadening tastes. 40% of the goat meat consumed in the U.S. is imported from Australia and New Zealand. The remainder is produced by farmers with herds ranging from 15 to 8,000 animals. In California and across the nation, the fast-growing Muslim, Latino and Asian communities are pushing up the demand for one of the most widely consumed meats in the world. California — with more than 100,000 goats — trails only Texas and Tennessee in the size of its herd. -Los Angeles Times

Comments:
If I had to sit next to carrot-Top I would have jumped out of the plane. He is a freak! LOL

RACHAEL!
that story is unbelievable.
Trust you to have an ex who is cute and looks like a celebrity!

What did you trade him in for? One who really is a celebrity, an even cuter one? one who would be a pleasure to sit next to on a plane for a hundred hours??

What are the odds??

isnt it weird how stuff like the happens?! i have run into exes in many a random, seemigly low- to n-probability places. LOL! weird.

Sam, my peach! You are a riot.

The ex on the plane is not what you would call cute...leprechaun is a more accurate discription...though he is charming...must be all that Blarney. The ticket woman must have been blind. LOL