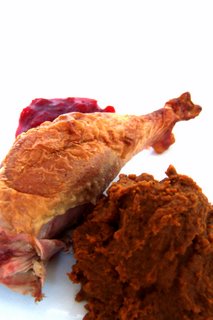 I am not the sort of girl who gets all in a dither over made-for-TV chefs. I just find most of their shows to be a teeny bit too chipper and the recipes are typically not anything I would make. Pretty people making pretty food. That doesn't mean I don't watch them sometimes, I just find I tune them out more often than not. (And besides, I get way more ideas from reading other food blogs!) "But, what about your post about Michael Chiarello's show, Easy Entertaining a few months ago?" You say? Well, turns out, on more than one occasion his program has really and truly inspired me. I watch his show and find myself getting excited to try the recipes, and have never been disappointed. This recipe is a prime example.

There I sat, a few days ago, watching Chef Chiarello bring this together for his Thanksgiving special, with my head cocked and eyes glazed over. I leaned forward, I sniffed the air in hopes the scent had somehow filtered through the screen. I may have bounced in my seat. As the show was ending I was half out the door to buy molasses (I used a lot last week baking gingerbread) and get cooking. It was well worth it. I only wish you too could lean forward and smell this through the screen. I have never, and I mean never, encountered such a fantasmagorical combination of flavors.

Sure, its not the most photogenic, but the taste? Boggles the mind. The layers of flavors mingle to a perfect balance. The deeply complex balsamic tames the rich and intense and just a tiny bit acrid molasses, they play off the sweetness of the sweet potatoes and the vibrant rosemary and hint of fragrant sage. It is a sensation. All rich and vivacious buttery smoothness with a bite. I praise Michael Chiarello for inspiring this recipe. (I have made a few wee changes) It is just supreme. Please do try it, and enjoy.

Preheat your oven to 350F

Line a sheet pan (with sides) with foil/parchment/a silpat.

In a small saute pan, melt the butter. Remove from the heat and add the herbs, vinegar and molasses. Pour this over your cubed potatoes, and stir to combine. Its ok if there is a lot of extra liquid, pour that on in too.

Spread the potatoes in a single layer on the sheet pan and season with salt and pepper. Roast until softened, about 45 minutes. They are done when you can insert a small knife into a piece with no resistance.

At this point you can serve the sweet potatoes as they are, (which I seriously considered doing) or puree in small batches in your Cuisinart/Magimix/blender.

Taste, adjust seaonings as you see fit and serve.

Makes enough for six - eight people as a side dish.

Molasses was so important that the founders of the United States colony of Georgia promised each man, woman, and child who endured a year in Georgia 64 quarts of molasses as a reward.

Molasses is the primary flavoring in rum. Prior to the American Revolutionary war, it is estimated that Colonists, (men, women and children,) drank an average of four gallons of rum a year. - Grandma's Molasses.com

Raised in the heart of Brooklyn, the son of a children's clothing manufacturer and a stay-at-home mother, Mr. (Isaac) Mizrahi watched an inordinate amount of television growing up. To this day, he said, he is unable to fall asleep without the TV on. The Food Network is his favorite, he revealed, before offering a 10-minute testimonial to the genius of the chef Emeril Lagasse. He was not being ironic. As a child, Mr. Mizrahi said, he dreamed of being a raconteur: the über-dinner guest sprinkling bon mots over red wine and beef Bolognese. "Isaac," his daily hourlong talk show, premieres Dec. 5 on the Style cable channel. -NY Times.com

Comments:
Now I'm sorry I missed this episode, Rachael, because these sound simply amazing. But I already have everything I need in my pantry, so perhaps I'll have a chance to try them this week!

Hope you had a wonderful Thanksgiving Rachael. I've missed catching up on you while I've been settling in! Hopefully things are settled enough here that I can get over here more often.

Wow Rachael, this does look good! I just keep trying to imagine what sweet potatoes, molasses, rosemary, sage and balsamic vinegar can possibly all taste like together... Guess there's only one way to find out! :)

This combination looks great. Do you have any favorite sweet potato varieties?

This looks great. I wonder if it would work with blackstrap molasses (and perhaps an extra spoon or two of brown sugar) for blackstrap's amazing nutritional properties...

Thanks for the recipe!