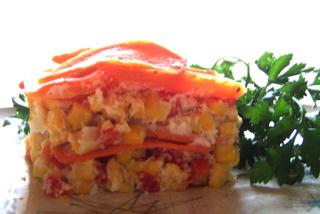 Oh dear. I am caffeinated to the hilt. I am so jittery I'm seeing double. Yikers. My mind is racing at about 1000/rpm. All of this is self induced of course, since I have had 4 super grande mega watt-lattes in the last two hours and am nursing another as I shakily type. The dismal weather has me trapped indoors, with a back log of purdy pit-chas to share and the single minded agenda to share them while attempting to quench an insatiable thirst. Or so it seems.

Here before you sits a picture of a corn and sweet potato semi-souffle (meaning, it uses the souffle concept of egg whites, but isn't all about the poof) that I made yesterday. I had no clue there was an online (yes, another) event (IMBB) for souffles this week, so it is just kismet I suppose that I made it. Despite its total lack of photographability (which may or may not be a word, yet I am on a forward streak and going back to fix it/check is off my agenda) was the mostest yummiest.

It is a multi step process that was pretty simple as long as you get all your ingredients and equipment out in advance. (AKA mise en place) The colors are terrifically autumnal, the combination of hearty potatoes and light as air corn souffle makes it a treat to eat. There are also a lot of sensational variations on this theme you could pull off. Adding some smokey chipotle chiles to the egg whites, using leeks instead of the potatoes or maybe including a layer of shrimp. The possibilities are endless. It also has the added appeal of having all the fantasy-like souffle etherealness, without the fear of a big deflate. Try it, and enjoy! 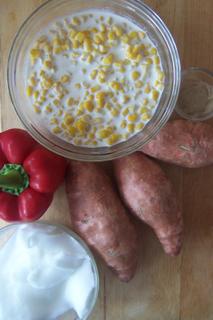 Add the potato slices to a large pot of salted cold water, bring to a boil and simmer until just cooked, about 6 minutes. Drain and set aside.

Fold half of the eggwhites into the corn mixture, then add the other half as gently and throughly as possible.

Bake, uncovered for 35 to 45 minutes, or until set and the top layer is lightly browned.

Serve warm or at room temperature.

I've said it before and I'll say it again: " The African word "nyami" referring to the starchy, edible root of the Dioscorea genus of plants was adopted in its English form, "yam". Yams in the U.S. are actually sweet potatoes with relatively moist texture and orange flesh. Although the terms are generally used interchangeably, the U.S. Department of Agriculture requires that the label "yam" always be accompanied by "sweet potato.'"

A Japanese government panel on mad cow disease, delayed a decision again today on easing the ban on U.S. beef imports. Japan bought about $1.5 billion worth of U.S. beef in 2003, making it the most lucrative overseas market for American beef products then imposed the ban on Dec. 24, 2003, after the discovery of the first case of mad cow in the United States.

Looks tasty! I could see doing these in individual timbales and plating them up as a first course.