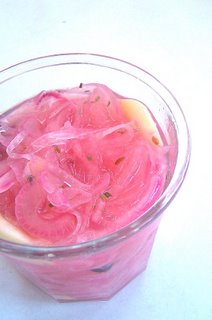 Do I mention pickled onions quite a bit, or what? Since they are just one of my totally favorite things to make, I'm including the recipe to go with the gravlax post above. I first made these at a restaurant I worked in as a student and (can't name because just thinking of that chef makes me want to cry.) was constantly dipping my fingers into the jar for a taste because I found them to be so irresistable.

They go supremely well with any sort of charcuterie, pate, raclette, smoked salmon, on sandwiches - especially grilled cheese, and as an excellent bagel topping.

Minus slicing the onion (which, if you do by hand and not with a mandoline, can be time consuming) the whole thing takes about eight minutes to make and keeps for about a month in the fridge. The herbs and spices can and should be adjusted to your taste and what you have on hand.

They really impress people too, and you will never have to say how easy there were to make, unless you want to.

Oh, and please beware, simmering vinegar will fill your kitchen with fumes. It's not that big a deal, but it is strong.

In a sauce pan, combine the water, vinegar, sugar, salt, garlic and spices. Bring to a gentle simmer to dissolve. Taste to adjust seasoning. Add the onion and let simmer for two to three minutes, stirring once. Remove from the heat, allow to cool and store in the liquid.

Approximately 88 percent of the onion crop is devoted to yellow onion production, with about 7 percent red onions and 5 percent white onions.

Many cultures have historically fermented foods by burying them underground, producing a rotted, yet edible delicacy. The Chinese buried eggs; Islandic communities interred shark meat in the sand; Scandinavians fermented fish in the ground, along with cheese and a traditional liquor; the Scottish buried kegs of butter in peat bogs, slowly fermenting it for seven years before eating it; the Inuit people still bury whale and seagull meat. -Exploratorium.edu

Check out the beautiful IMBB round up at Kitchen Chick. Thanks chicky!

Comments:
I'm sold.
I may add a few spices to this, if that's Ok, but I'm with you ~ a shameless salty girl.:)

(Salt is good, yes!) I love to pickle onions, also habanero peppers and ginger. Delicious and a great idea to have ready in the fridge. Hugs from Panama!

Hi there. I just made the recipe and the onions are really salty! Does the saltiness reduce after a few days? Thanks

Anon...did you let the salt disolve completely? But, in answer, no they dont get less salty....they are pickles. You could try rinsing them off, and putting them in a solution without the salt, or try the recipe again with less salt...

Thank you...these are wonderful. I made the sandwich featured on Oprah by the Table 8 restaurant owner. It's a short rib grilled cheese sandwich with pickled onions. Truly decadent.

these are wonderful! they make sandwiches and salads so much more exciting.

I made a batch in around November, boiled a little longer than you said, and then put into a sterilized jars and then into boiling water canner so that the lids would actually seal. then I kept them in the fridge, to extra hedge my preserving bets, and opened one small jar immediately and the other larger one a month later. I am still eating from that 2nd jar now, in February. nobody's died yet, but I don't *really* know a thing about food safety and pickling as preservation. I would love to figure out whether this recipe with sterilization and canning techniques actually has enough vinegar and salt to last forever in the pantry.

Thank you for the recipe, I have just followed it and the result is perfect!

I stumbled upon this recipe and it was a toss between this and a Martha Stewart recipe to go on top of meatball subs. I chose this one and I'm so glad I did! My son and I ate them on our meatballs and then later I had them on crackers with cheese and sardines. So good!!! I'll be making these regularly! I didn't have salty onions - maybe because I used sea salt and it's not as salty tasting as regular salt?

Freaking fantastic. So good, I tripled the recipe.

I love anything pickled, and I had to sneak a bunch of these while they were still hot and burned my mouth.

I may make them with white wine vinegar and add some cloves and sliced garlic and peppercorns. My brain is about to explode.